'It literally began with a single step'

Zach Bonner is not a combat sports fan in particular, but he is a black belt in Tae Kwon Do, starting in the juniors program at age three.

And through his Little Red Wagon Foundation, which focuses on improving the lives of homeless children all over the world, he exhibits the daily traits that we as fight fans cherish.

It literally began with a single step.

His journey is now the focus of a movie called Little Red Wagon, which is being released exclusively today on DVD in Wal-Marts across North America. It features some big name talent who came together to tell not just Zach’s story, but the story of homeless children.

Bonner spoke with MMA Crossfire’s Kenai Andrews to talk about the movie.

EDITOR’S NOTE: This conversation took place in 2013 when Bonner was fifteen years old.

MMA Crossfire: Welcome to Toronto, Zach. Is this your first time here?

Zach Bonner: It’s great. I love Canada. It’s always exciting to get to come back. I’ve been here a few times, but the last time I was here was when I was seven, so it’s great to be back. It’s fun.

MMA Crossfire: Let’s get into the movie. How much of a consulting role did you have in Little Red Wagon?

Zach Bonner: Around the time the movie was being shot, I was on my march across America when I did my coast-to-coast walk. So it was harder to be as much of a part of it as we could of otherwise. But when it came to the script, we got to read it before it went to production. And we had a little bit of a say. But they stayed really close to the story and they got across a lot of the points we wanted to get across in the movie. We were really pleased with the way it turned out.

MMA Crossfire: What was some of the reaction because it came out earlier in theatres?

Zach Bonner: Yes, it came out last year. That’s when the theatrical release happened. We were at a film festival in 2011 (Heartland Film Festival) in Indianapolis but our real theatrical release was around October of 2012. And tomorrow (January 8th) it’s coming out on DVD to all the Wal-Mart’s in the United States and Canada.

MMA Crossfire: What was the reaction?

Zach Bonner: It was great. We had people laughing, people crying. We had a great response from the communities that we released the film in. From the audience… People really loved the move and we were really happy to see that.

MMA Crossfire: If someone told you in the beginning there would be a movie made about your inspirational journey, what would you tell them?

Zach Bonner: I would have told them they were crazy. When I first started, we never had any idea that it would turn out into what it is today. It started out as a really simple idea of collecting enough water, food, supplies for victims of Hurricane Charley. It grew into an organization that we now do work all over the world. We’ve distributed over 10,000 backpacks full of food, personal hygiene and basic supplies to homeless youth all over. It’s grown so much and it’s amazing to see the support from individuals to major companies stepping in to get behind the cause and help out.

MMA Crossfire: Are you a MMA or boxing fan by chance?

Zach Bonner: Unfortunately, because of all that I’m doing, I don’t have the opportunity to follow a lot of sports. Unfortunately.

MMA Crossfire: What inspired your focus on improving the lives of the youth?

Zach Bonner: Well, when I first started with Hurricane Charley, it started out with hurricanes and then it was really after that project that I learning about homelessness and youth homelessness in particular. Once I started reading stories and hearing the statistics and meeting the kids it really began a question of ‘How can I not help?’ It really inspired me to get involved, especially with youth. Because I myself am a kid. And if I was one of these kids, I’d want someone to help me. So it’s kind of mindset that kind of fuels it.

MMA Crossfire: And now you lead a multi-dimensional effort that assists in many different ways. What do you think about movies and their power to get a point across or inspire a person into action?

Zach Bonner: I think that a movie really has the potential to touch so many people as opposed to other means. It can be entertaining but at the same time really educate people about the problem and that’s what we’re hoping with this movie. That people will see it and be entertained, but also educated about the problem and they’ll be inspired to get involved. Another thing we’re really trying to do with the movie is inspire kids. Show the kids that it doesn’t really how young or old you are, you can get involved. You can really change the world if you try.

MMA Crossfire: Are we making progress in combating the problem?

Zach Bonner: We are making progress, but the problem is incredibly huge and in fact it’s growing quite rapidly. But we are seeing awareness in people and I really believe that’s the answer to the problem. Education. We have to educate the general public, political figures, companies, kids – even the homeless themselves. Education is the real answer to the problem. That’s the hope of this movie. That it will educate a lot of people.

MMA Crossfire: Did you learn anything from the experience of the movie?

Zach Bonner: Just on a personal level, it’s been an amazing journey watching the movie come together. From a technical standpoint… When we got involved with it, which was probably about six years ago now, when they first approached us. Going through the processes like casting… You get to meet all the incredible people that we have. One of our producers was the same one that did all the Twilight Zones. Our screenwriter, Patrick Duncan, did Mr. Holland’s Opus. Our director [David Anspaugh] directed Hoosiers and Rudy.. Seeing all these big Hollywood names coming in… What was also really awesome is that did it for a fraction of what they’d normally do. Because they really believed in the mission and in the cause. So it’s been amazing to see that.

Zach Bonner: Yeah. Like I said, movies have the power to really touch, entertain and educate people. Whether that is in our future or not, I’m not sure. But it remains a possibility.

MMA Crossfire: What is a typical day like for you?

Zach Bonner: The foundation is pretty much a full-time job. My mom and I are running the foundation together. On top of all that, I’m also a freshman in high school, so I’m trying to juggle and keep up with just being a teenager at the same time.  It’s definitely a lot of effort, but it’s so much fun and I love what I’m doing so I have to keep on.

MMA Crossfire: I read earlier that you want to pursue a career as a prosecutor. Is that still accurate?

Zach Bonner: Yeah. I still want to go into law and whether it’s prosecution or family law, I’m not really sure, but I think it’s the definitely the field I want to go into. It’s something I think I would really love doing. It’s also something I could really tie in with public service. Being able to take skills that I acquire going to school, working that in with the foundation and being able to help even more people.

MMA Crossfire: So what’s next?

Zach Bonner: Right now, we’re really busy with the release of the movie. It’s been kind of whirlwind since October with the theatrical release and now the DVD and video-on-demand. We’re working on that, but we’re also really excited… We’re putting together a youth resource center and that’s going to be in Tampa Bay, Florida where I’m from. It’s where kids can come in, get something to eat, wash their clothes, use a computer, get a case worker and move on to more long-term programs. So we’re really excited about that because it’s sort of a stepping stone into other programs within the community. But we’re hoping as it becomes really successful, that it will expand across North America. There are a few actually out there that are run by other organizations and they’re incredibly successful, so we’re hoping for the same kind of success with ours.

MMA Crossfire: When you talk about that, it makes me think about Covenant House…

Zach Bonner: We actually talked to Covenant House quite a few times and Kevin Ryan, we ‘re in touch quite often. I know he is the head of that program. We love it, and hopefully we can work with them even more in the future.

MMA Crossfire: We appreciate your time today Zach. All the best going forward with Little Red Wagon and the foundation.

Polina Grace: Doubling Down on Giving up (on giving up) 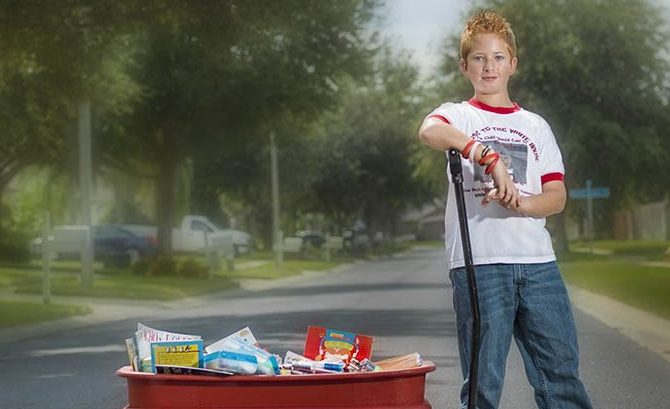