'My full story is finally being told'

It’s been quite a ride for Hossein Kosrow Ali Vaziri, known to millions as The Iron Sheik since his days a a bodyguard for the Shah of Iran.

His accomplishments as an amateur wrestler usually take a backseat to the character he made famous: The Iron Sheik.

As the ultimate anti-American villan in pro wrestling WWWF, the WWF, and now WWE, he battled heroes Bob Backlund, Hulk Hogan, Sgt. Slaughter on his way to championships, fame and glory inside the squared circle.

But the years and rigors of professional wrestling took a toll on the man.

Now it seems after years of the roller-coaster it is time to tell his story, with a little help from his friends.

“This film will show everyone the real Hossein Vaziri,” the Sheik said.

“My full story is finally being told. God bless my intelligent fans for their support.”

Powering the Iranian Legend: The Iron Sheik story are twin brothers  Jian and Page Magen. Wrestling fans since childhood, their father’s good friendship with the Sheik, created a special connection. “We’ve known the Iron Sheik our whole lives,” said Page in the documentary press release.  “Our father and the Sheik were great friends, and he would visit us whenever he was in Toronto.”

That connection has given them special access. They point to him as their inspiration to open their own event production and entertainment company Magen Boys Entertainment (MBE). They’ve been busy gathering footage for the past six years.

“Everybody knows the professional wrestler,” added Jian, “but few know the man behind the persona: Hossein Khosrow Ali Vaziri.  This will not just be a documentary about a wrestler, but a story about a man and his family.”

We’ve seen his biggest triumphs,” continues Page, “as well as some very low points.  We’ve known for a long time that this was a story that needed to be told, and have been gathering footage for several years. With over four decades entertaining his fans, there’s no time like the present to bring the Iron Sheik’s story to his fans in his own words.”

An Indiegogo campaign was started to raise $100,000 to fund the project and help cover the costs of production. A portion will also go for surgery to fix the Sheik’s ankle and knees. You can check out the campaign and donate here.

The Magens announced they are currently in negotiations with broadcast partners, with a possible announcement on it in the coming months.

The Iron Sheik recently answered a variety of questions in an email interview with The Crossfire. It’s our pleasure to share the answers with you.

MMA Crossfire: Why did take so long for your story to be told?

The Iron Sheik: WE WORK HARD WITH MY INTELLIGENT AGENTS BECAUSE THEY KNOW IRON SHEIK AND THEY WANT STORY TO BE PERFECT. THEY LOVE ME THEY RESPECT ME AND THEY LET THE PEOPLE KNOW GOOD THING HAVE TO TAKE TIME TO BE GOLD MEDAL.

MMA Crossfire: What do you want people to take away from the documentary most of all?

The Iron Sheik: THAT I AM MORE THAN GREATEST HEEL OF ALL TIME. I AM OLYMPIAN, I AM AMERICA, I AM FAMILY MAN, I AM COMEDIAN, I MAKE THE WORLD NEWS. EVERYBODY NEED TO KNOW WHO THE REAL IRON SHEIK

MMA Crossfire: What are some of your best memories of wrestling in Toronto and Maple Leaf Gardens?

The Iron Sheik: I LOVE THE TORONTO. I WORK VERY HARD TO BECOME CHAMPION. I HUMBLE MY GOOD FRIENDS THE ANGELO MOSCA AND THE BRUNO SAMMARTINO IN THE TORONTO. EVERYTIME I COME TO CANADA THE PEOPLE OF THE TORONTO ALWAYS SHOW ME THAT I AM THE LEGEND

MMA Crossfire: If the UFC had been around back around your amateur wrestling career, could you see yourself going with the UFC instead of the WWF?

The Iron Sheik: 10,000 PER CENT. I READY FOR ANYONE IN THE UFC. WHEN I AT MY BEST I COULD HAVE BEATEN THE F*** OUT OF ANYONE IN UFC. I LIKE THE IRANIAN GEORGES ST-PIERRE.

MMA Crossfire:  What do you think of mixed martial arts?

MMA Crossfire: Is the WWE assisting either financially or footage wise on the documentary?

The Iron Sheik I HOPE THEY HELP THE LEGEND. I LOVE THE MCMAHON FAMILY AND WE SEE WHAT HAPPENS.

MMA Crossfire: How do you wish people to remember The Iron Sheik the wrestler and Hossein Vaziri the man behind him?

The Iron Sheik: THAT I COME FROM THE IRAN TO I MOVE TO GREATEST COUNTRY IN THE WORLD THE AMERICA TO I LIVE AMERICA DREAM SO I MAKE IT TO THE HALL OF FAME. THIS WAY I FOREVER BE HERO TO PEOPLE FROM ALL ACROSS THE WORLD. I LET PEOPLE KNOW IF THEY WORK HARD, THEY DO TRAINING, THEY TRY THEIR BEST THEY TOO ONE DAY BECOME IRON SHEIK.

MMA Crossfire: Who were some of your favourite guys to travel with or be around with in wrestling?

MMA Crossfire: How does it feel to be an inspiration not only to a nation, but to fans worldwide?

The Iron Sheik: OH BEST QUESTION BUBBA. I LOVE THAT PEOPLE SEE ME AND THEY KNOW I AM THE LEGEND. THEY KNOW I WORK HARD ALL MY LIFE AND KNOW THEY KNOW THAT FOREVER I BE LIKE MICHAEL JORDAN AND THE FRANK SINATRA.

MMA Crossfire: Health wise, how are you feeling?

The Iron Sheik: NOT SO GOOD. KNEE BOTHER ME, ANKLE BOTHER ME. I NEED THE HELP SO I FEEL BETTER.

MMA Crossfire: When you look back at your days in Iran, are you hopeful by what has been recently going on there politically?

The Iron Sheik: IRAN NOT THE SAME AS IRAN BEFORE. TODAY GOVERNMENT CHANGE PEOPLE CHANGE. I DON’T LIVE THERE SO I DON’T KNOW AND THE NEWS ALWAYS SAY MILLION DIFFERENT STORY. I HOPE THE PEOPLE OF THE IRAN ARE GOOD. 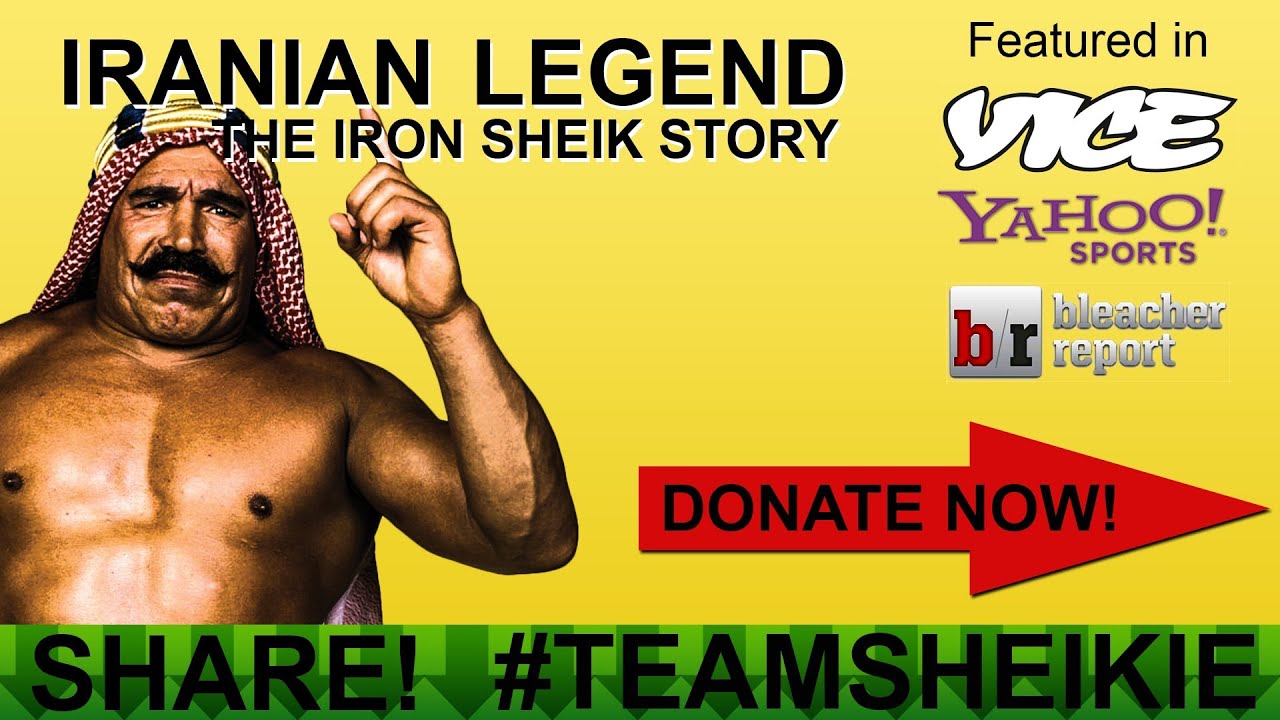