I was once ranked ninth in the world in women’s professional bodybuilding, had a long and lucky fitness modelling career and, at the same time, being in and on the covers of Muscle&Fitness, Flex, MuscleMag, Ironman, Muscular Development, and more.

My pro debut, The Jan Tana was won by yours truly. I also competed and placed well in The Arnold Classic, the now defunct Ms. International (for women bodybuilders), and did the Olympia twice.

The Olympia is considered the Superbowl of women’s bodybuilding, or more aptly, the Wrestlemania of women’s professional bodybuilding. I also have done some film work and was on the popular game show Extreme Dodgeball as a member of the Barbell Mafia team.

I am also a WWE developmentally trained pro wrestler. I like to call myself “The Diva who never quite made it”, or the girl who trained with all the girls who really made it such as Mickey James,Beth  Phoenix, Melina and Jillian Hall, and other girls from the Ohio Valley Wrestling (OVW) era 2003 to 2005 (OVW at that time was a WWE developmental.

Those were golden days of my pro wrestling experience as I look back on it.  Victoria (Lisa Marie Varon affectionately recalled her days training there as well.

Damien Sandow, Santino Marella, and Dolph Ziggler were also training there at the time, under Rip “The Hustler” Rogers (a tough but fantastic trainer), Lance Storm (now an extremely successful trainer with his own school up in Canada, Nick “Eugene” Dinmore (now a trainer at WWE NXT in Orlando).

Bill Demott (trainer at NXT currently), and occasionally trainers such as Dr.Tom Pritchard would come in to show us the ropes.  Jim Cornette was the booker for the OVW product for awhile. After a somewhat famous incident, he was replaced by Paul Heyman.

At OVW, I often served as The Diesel to Jillian Hall, and my experience there led to my taking “The Masterlock Challenge” at “Backlash” WWE pay-per-view in 2005.  The business behind pro wrestling is no fairy tale. It can be a “cruel mistress” as I often hear repeated from current WWE NXT trainees. I had some bad luck, so that didn’t lead to the promised land.

But I received another shot by traing at DSW under Demott, where I played an interesting character called “The Bag Lady” opposite a man best known to us as Straight Edge Luke Gallows.

Here, Drew played a homeless man whose only friend was his pet spider. One day he is awakend from his sleep in the sewer by loud clanging.

He comes out of the manhole, and sees a homeless woman rummaging through the dumpster. He confronts her, she slaps him, and its true love from then on.

The gimmick was extremely popular for DSW TV, and we received a  try out at WWE Smackdown.

It was deemed “too 1980s,” and so went that gimmick. Luke changed his several times before finding success as “Festus.”

It’s interesting to note now that many of the trainees at NXT have adopted gimmicks, such as Emma with her unco-ordinated dancing, and the new Russian wrestler as well. The Bag Lady, I guess, was before her time. DSW was discontinued by the WWE in summer of 2006.

In the meantime, I am still wrestling on the independent scene, most notably now for The Territory League out of California. I also wrestled for quite a while at NWA Anarchy, which produced AJ Styles, and been on a 10 day tour of Nepal. I also had the honor of wrestling for the WWE Hall of Famer class of 2014 Carlos Colon for WWC in Puerto Rico.

The business is hard to get out of your system once it’s there.

So very early on Saturday April 5th, on about two hours of sleep, I jumped in my car and started the 7-plus hour drive to New Orleans.

Driven by adrenaline, I managed to do it almost straight through, but for two coffee/bathroom breaks.

On the drive in I passed a car with “Next Stop: Wrestlemania” printed in chalk on the back window.

I had to laugh at that, and an interesting situation where a man had stopped his car on a bridge to relieve himself … instead of pulling over and going somewhere less conspicuous.

And about 30 miles out of New Orleans, I saw to the right about seven or eight police vehicles, and a couple in about their late 20s or early 30s in handcuffs, being arrested. Their car was down someone’s lawn, so there obviously was some sort of chase.

Finally I got to my hotel and right on the front desk was The Time-Picayne, with the headline “Setting the Stage, Getting Ready to Rumble”, so I picked up a copy.

I would have guessed  as much, the WWE does bring us the biggest show on Earth.

So I checked into my room, had a protein bar, and started to get ready.

As usual, pretty much everything goes wrong right when I am in a hurry … I had some new long hair extensions put in, and two rows fell out!

Lucky for me, I brought clip-ins in case of an emergency. Any of us women in the business know how to be ready to handle things like this, so I didn’t really get too upset, but it did slow me down in my preparations.

Once I was ready in my nude dress with a red floral print and these fantastic new shoes I found a day before on sale for $10! In this business, you also learn to look for bargains.

I grabbed my keys and headed downstairs to get to my car.  Again as luck would have it, it was now pouring rain.

So now, I had to run through the rain to get to my car, knowing my tan (I apply extra color when I have an event to go to), and the hair I had just taken over an hour to put together was going to get messed up.

The trip down to the Smoothie King Center was about 10 miles away, and not bad until you got stuck into the crazy traffic situation around the SuperDome.

Finally I navigated through everything, and by now it was very close to show.  I parked my car, and decided I’d made faster time with my heels off, so I got to the sidewalk and then put my shoes on.

Walking on the brick-like sidewalk was no easy feat in my heels, so I carefully made my way to a set of  doors about half a block down from where I parked.

Security checked my purse at these tables and tents, I got into the building, asked for help for finding my seat, and made my way up the escalator.

Again, not so fun in heels.

With the trails and tribulations of the day I was getting into the building just after start time, and as I made my way to my seat, there was on the big screen the story of Lita, who was being inducted into the class of 2014.

She was an incredible wrestler, known for her style (thong especially), and her moonsault.  And the presenter was several time Diva’s champion (at that time WWE womens champion) Trish Stratus, looking very good after having her first baby in the past year.

Trish and Lita had a very strong program together at the time they were both at WWE, and Trish pointed out they were besties, partners in crime, and still friends to the end.

Trish brings up Lita’s changing the way the world wears a thong, and also the fishnet style that made Lita a favorite among women.

Lita’s music hit and out she comes wearing a long glamorous dress, which is not the attire we are used to seeing her in,  tells her story of having a dream, getting herself to Mexico, and through such perseverance met the right people and made her dream come true.

She mentions Rey Mysterio, Essie Rios, Team Extreme, and her time at ECW.  And her interesting later storylines at WWE with strange marriage proposals and pregnancies, the story of her being pregnant by Kane in particular.

Her last storyline saw her being with the “Rated R Superstar” Edge, and she comments on her having worn the most “slutacular” wedding dress ever.  As always, Lita is very down to earth, and the crowd responds well to her.

Finally she thanked the punk rock scene for allowing her to feel comfortable with just being her … it lead to the mindset for her future success.

Ronda Rousey announces she is pregnant

Andrews: How many MMA fans will watch WrestleMania 35? 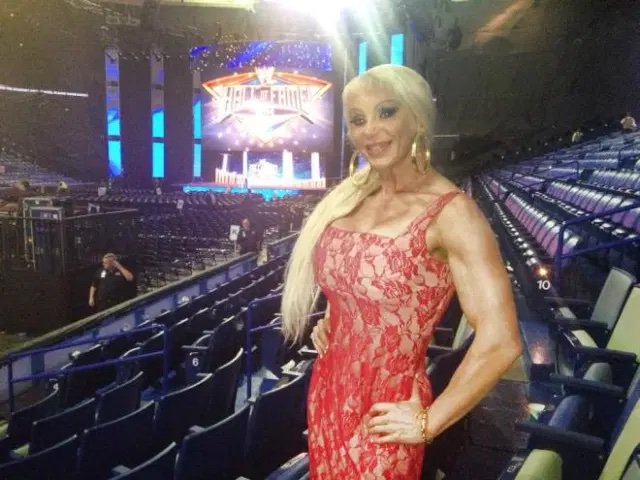