Breaking the MMA Lens: Sorting through the masses

By far the toughest job in shooting MMA events (or any sporting event) is sorting and rating the photos. If you’re shooting one or two fights that’s one thing, but if you’re shooting an entire event, you take a lot of pictures.

I take somewhere between 2000 and 3000 shots at just about every event I shoot. I use two cameras and the shots are split up fairly evenly between them. That’s a lot of memory card use and drive space.

I don’t keep every shot. Let’s face it, some of them are real crap. The walls, the floor, a shot you thought was great but is actually totally out of focus and I don’t mean in a good way. I use a 10-shots-per-second burst on my Canon 7D Mark II. So if I take fifteen shots in a sequence, even if I get one good shot, that’s fourteen others that won’t be used. The biggest trick is then going over 3000 shots without going insane.

I shoot in JPEG. I do not shoot RAW for 3000 shots. Too much memory, too much time. For smaller projects, I;ll shoot RAW and then my editing process is different. We will talk about RAW vs JPEG another time. For an MMA event, I use two programs to sort out this mass of media. This may or may not be the best way for everyone, but it works for me. I’ve tried a few variations but always go back to this.

First, I dump my cards into a file on the computer. I name the file with the date, followed by the name of the event (“2015_01_22_Acme_MMA_2” for example). I use reverse-date order so the files come up in a nice order when I’m looking through all the photo files I have.

Once they’re dumped into the computer I review them in Adobe Bridge. I immediately delete the shots of the ceiling or my foot and rate the others.

1,2 = I’m probably deleting, but I want to go through and see what else I have

3 = I may keep it, but am probably not using it

4 = Good shot, possibly worth putting out there 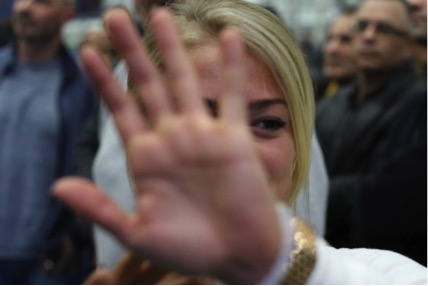 Now it’s on to the next program, Adobe Lightroom. I go through the photos again.

U=nothing (we may end up keeping it, maybe not),

Once I go through this stage I’ve got a few hundred P photos. I delete the X photos and many of the U’s.

Now we go through the P’s. Depending on how many pictures we want to end up with, I can be more or less picky with my final choices. Sometimes, though, we just need certain shots. For example: sponsors, special guests, the venue etc. They don’t have to be great, they have to document what happened.

I process the finalists in Lightroom and once in a while in Photoshop. I do not do anything to the photos except play with the contrast, crop and darken or lighten them. I used to remove distractions in Photoshop, but no more. I think it’s better to have the photo just as it is.

After this whole process I’ll end with about 150-250 shots that are worth looking at. I hope to get two or three special shots from each event. Shots that would go on my website or portfolio for example. So, you take 3000 shots and end up with 2-3 real photos. It’s worth it.