On March 7, I had the pleasure of being invited to attend and report on the 2015 Arnold Sports Festival (known as The Arnold).

The Arnold is the largest health and fitness event in the world, with over 175,000 attendees and 20,000 competing athletes (making it twice the size of the Olympics). The hosts were founder Dr. Bob Goldman and “Governor” Arnold Schwarzenegger. Over 800 members of the international press are invited each year, as well as select world champions and past inductees.

Candidates are chosen for not only their athletic accomplishments, but also for their charity work and mentoring of children.

I’ve competed with Lenda, standing alongside her at the 1996 Ms. Olympia contest, and also worked some with Triple H while I was training with the WWE, so it was exciting to have experience with these inductees.

The room on the second floor of the Greater Columbus Convention Center was packed with fans and media. I enjoy auspicious events like this, celebrations great people and great careers. I find it inspiring, a collective feel-good moment and for many of us, an event that joins all of us together.

There is a lot of mingling before the ceremony as this is usually the only chance for many of meeting up with old friends that may see once or twice a year.

Speaking of the inductees, they are:

Ed is generally regarded as the greatest power lifter of all-time.

Dr. Goldman showed off the impressive hand carved 2.5-pound medallions held by a purple ribbon that he awarded to each inductee and then introduced the first inductee, powerlifter Ed Coan. He ran down some of Ed’s accomplishments and commended Ed for his time, energy and effort into mentoring children. In a recurring theme, Dr. Goldman joked as he puts the heavy medal around Ed’s neck that Ed has one of the biggest necks this side of former inductee Mark Henry.

Ed took the podium afterwards and said it’s a dream come true to be on stage with Arnold, Dr. Goldman and the other inductees, the pinnacle of his powerlifting career and thanked his parents for letting him be the “goofball and self-absorbed little idiot” that he was as a kid that allowed him to attain his numerous awards and records. He said in the end, it’s not the world records that count, but the journey, and that all his surgeries, muscle tears, and pains are gone thanks to moments like these.

Don is an 11-time kickboxing world champion, scoring 47 knockouts in 3 decades, and an accomplished film actor having over 4o films to his name. He starred in the Bloodfist series, is in the 2015 The Scorpion King 4: Quest for Power (which also stars bodybuilding legend Lou “The Hulk” Ferrigno.

Don has a starring role alongside martial artist/actress and 2014 inductee Cynthia Rothrock in the upcoming film The Martial Arts Kid.

After some jostling about his propensity to talk from Dr. Goldman, Don talked about just two fights. One in 1974, where he fought on a concrete floor, was paid $100, broke his hand, “which cost more than $100 to set,” and lost the fight.

“I lost the fight, lost money, and I loved it!”

He won his last fight via knockout with 48 seconds left  which he said makes him maybe not the best fighter, but the luckiest.

Lenda is an eight-time Ms. Olympia world bodybuilding champion, and is notable in winning six consecutive years from 1990 to 1996, and then came back from retirement at 40-years-old to win two more times in 2002 and 2003.

Lenda had what I thought was the most impactful speech of the evening.

It started out once again with some playful jokes from Dr. Goldman, who has known her since the 1980s. However, things became real quickly. And from my experiences with Lenda on the pro circuit, I appreciated her typical straightforward approach.

She spoke with an earnest intensity that engaged the crowd, acknowledging the 19 years of support from her husband. How she started off as a cheerleader at college while getting her biology degree. At that time, she was trying to be what society deemed a woman should be: A small bikini competitor.

Even when her girlfriends objected to her pursuit of muscle, Lenda was unrelenting.

She told the crowd intensity that she “wants to empower women.  We decide what we want to look like. Who we are. What we are. If you want muscles, you can have muscles. It’s up to us. Women, we rock   Yes we do.” It was a great moment, and Lenda was fabulous for saying it.

Evander is a five-time world heavyweight champion and one of the greatest boxers of all-time. He holds notable victories over fighters such as Mike Tyson, George Foreman, Larry Holmes, Riddick Bowe.

Dr. Goldman pointed out that the Evander Holyfield Foundation that Evander created, helps mentor kids. Evander takes the mike and after thanking God, he tells us of his early beginnings and teaching from his support system, his mother. He says when he was 8-years old, his mother told him to never be prejudiced because it limited your opportunities to be successful. Which was important in his case, because his first coach was Carter Morgan, a white man who told Evander he could be as good as Muhammad Ali.

Morgan also pointed out to Evander something extremely important: The difference between a goal and a fantasy. “A goal is something you work at. A fantasy is something you want to be, but you don’t want to work at it.” Evander said there were many people out there who could have been champions and attain goals like he did. They just needed someone to tell them three things: Listen, follow directions, and not quit.

Dr. Goldman called White a renaissance man, informing the crowd his career started at the age of eight that evolved from fighting to acting, directing, and producing. Black Belt magazine named him Man of the Year and his film Skin Trade will be out this year.

Michael takes the time to teach, and that was his original career before acting. Dr. Goldman said Michael is probably the “greatest living martial artist,” which seemed to visibly irk Don Wilson. “Only has to hit you once and you are down,” joked Dr. Goldman.

White graciously accepted his medallion with his trademark movie star smile.  He said it’s surreal and amazing to be on stage with so many heroes who comprise who he is, and recanted how seeing Arnold in the film Pumping Iron changed his life, leading him to this day.

Paul Levesque is a 13-time WWE world champion and the company’s executive vice-president of talent, live events, and creative. As a director and producer, he also assists behind-the-scenes in creating WWE storylines.

Now for the final inductee, Triple H: Dr. Goldman told us Triple is qualified not only for being an athlete, but for being an executive and a Potts official. Every year someone with executive ability is inducted.  Triple H was commended for giving back to society, mentoring children, and making the world a better place. Triple H noted the medal is, “a weird fashion accessory.” He then delivers a speech befitting someone who has made a living in front of TV audiences since he first debuted in the WWE in 1995.

He complimented the inductees generally and Arnold specifically, saying he is the American Dream and revealing he learned from reading about his sacrifices to become the best, and that sacrifice to reach the goal is what is inspiring. He thanked Lenda Murray for transcending her sport and making it possible for women to be extraordinary, and he hoped to show this to his three little girls. He thanked Vince McMahon for giving him the opportunity, and thanked his wife Stephanie for her support.

He encouraged encouraging the crowd to let today be an inspiration, and a turning point for everyone to start their own path to their goal to a round of applause.

Incidentally, Arnold will be inducted into the WWE Hall-of-Fame this year.

Arnold closed off the star-studded ceremony by first teasing Dr. Goldman about his flashy clothing and big watch and then left with a reflective sendoff.

This, he said, is what the United States is all about. Giving back and creating opportunities. The US made Arnold what he is today, he said. “Giving, giving, giving. And inspiring other people to be great.”

See you next year! 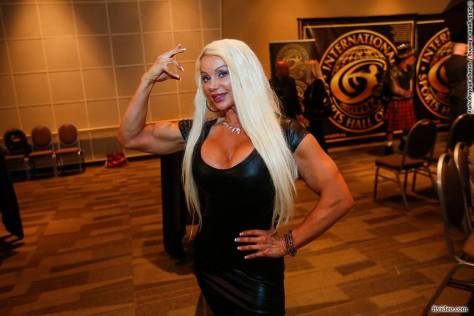