UFC 189 might be a tough act to follow for the TUF 21 Finale, but Jake Ellenberger and  Stephen Thompson are going to give it their best shot.

The two welterweights are the main event given what happened at UFC 189 between Rory MacDonald and Robbie Lawler, it’s a chance for the two to elevate themselves solidly into that second tier of the division.

MMA Crossfire Expert Kenai Andrews checks in with his thoughts on the main card matchups.

Andrews: Tough one to call. Blanco likes to knock people out, while De La Torre also like to submit. He’s the more versatile fighter and on paper should win, but I think he will get caught by the striking of Maxi.

Andrews: The only question in this matchup is whether the UFC jitters will prevent Waterson from getting the finish. Magana was outstruck by pint-sized Tecia Torres in the TUF 20 Finale and I think Waterson will do the same, wherever the fight goes.

Andrews: It’s been an uneven road for the TUF winner Ferreira.  Losses to Sam Alvey and CB Dollaway have shown he cannot rely on his striking alone and that his defence needs improvement. Masvidal bring that wrestling/grappling component that should dictate the fight and earn him a decision win.

Andrews: Both guys are making their debut here. Luque has the experience factor, but it’s hard to ignore Graves’ TUF performances. Graves will silence the Silent Assassin.

Andrews: Hassan brought it home for American Top Team on TUF 21 and his empathy created a feel-good moment for the Wounded Warriors Project. But he faces another knockout machine in Usman, who competed for The Blackzillians on TUF. When the dust clears, I think Hassan will be the one standing.

Andrews: So many ifs, whens, and buts in this contest. When Jake Ellenberger is motivated, he is tough to beat. But he’s lost badly to the top fighters in the division. So which Jake will show up? Thompson has never fought the calibre of Jake before, but trains with Chris Weidman, and his striking is very good.  He can make Jake worry and stay on the outside instead of going for the takedown.  So I’m going with the Wonderboy. 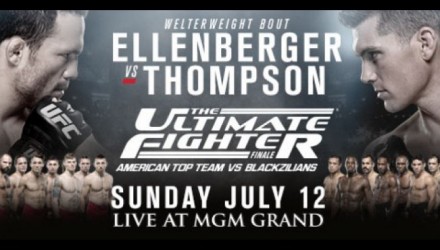