It’s been 28 years since professional basketball great Julius “Doctor J” Erving’s last NBA season and there still seems to be a glaring lack of basic knowledge for what the man did to earn the accolade as one of the greatest players ever.

Shaquille O’Neal took some heat recently for declaring that he thought Dr. J was the best, in addition to being his favourite player over others like Michael Jordan and LeBron James.

But it was watching a special Erving NBA Open Court segment with host Ernie Johnson and former players turned NBA analysts that inspired this piece to show casual fans why The Doc deserves to be mentioned among the greatest.

A good place to start is the excellent 2013 documentary “The Doctor.” It shows it was much more than dunks and personality that made Erving special.

In case you missed The Doctor:

Erving played 16 seasons in total. He is primarily known for being an exceptional offensive player but not paying enough attention to defence.

The record shows Erving has a single 1975-1976 1st team ABA all-defence nod and no selections in his 11 year-NBA career.

Yet, as rival Larry Bird notes in his 1988 book Drive, Erving was a much better defensive player than the critics gave him credit for.  As it turns out, Erving retired in 1987 as the game’s all-time leader in steals (since passed by John Stockton).

To dispel the notion of Erving as a degenerate gambler on defence is one of the greatest defensive forwards of all-time and Erving teammate Bobby Jones, who told journalist David Friedman: “He was an exceptional defensive player. My goal during my career was to get 100 steals and 100 blocked shots every year. I think that in my 12-year career I did it six times. He did it quite a few times (more than that). Those are unselfish stats. Those are stats that don’t hurt your teammates; they help your team. He had good anticipation and he was willing to gamble. He was willing to expend the energy and he was a tremendous athlete who could play both ends (of the court).”

Erving was also a tremendous shotblocker, wherever he played on the court and into his elder years as well.

To put this stat into perspective, Michael Jordan has one (1) comparable season: an exceptional 200-steal 100-block season.  Top defensive centre Hakeem Olajuwon also has 12 100-100 seasons in his 18-year career. Kareem Abdul-Jabbar, Kevin Garnett, Ben Wallace and David Robinson also deserve mention here with Erving for racking up numerous 100-100, 100-200 and 100-300 seasons. But Erving at 6-6 and a half is the only small forward in the group.

Many casual and even experts refuse to acknowledge the first third of Erving’s career, which was spent in the American Basketball Association (ABA). It’s generally regarded as inferior to the NBA by most fans and a semi-pro league at best.

The ABA was the smaller, more volatile league. It didn’t have as many teams as the brown-ball league, and with its cash problems, teams appeared and disappeared frequently.  The lack of a national TV deal was a big nail in the coffin of its demise and effective merger with the NBA.

But the ABA had a serious swelling of talent once undergraduate players like Erving joined the league in 1971.

Fact: The ABA owns the all-time record over the NBA in league-vs-league play.

Fact: It was the NBA who for years refused to play the ABA champions so that a true world champion could be determined. Doc and the 1975-1976 ABA champs New York Nets challenged the 1975-1976 NBA champ Boston Celtics and the NBA refused. That makes the Nets as the last true “world champions” in my book, as the Nets entered the NBA the following year as the New Jersey Nets with the ’75-76 team disbanded.

A GOOD, BUT NOT GREAT JUMPER

Erving, for his time, had an average max range of about 15-17-feet. That meant you couldn’t lay off him. The jumper was still the best option to give Erving in many cases, because he had a million moves inside and was tough to stop with a head of steam on the break. The key was to make Erving shoot a few feet farther than these ranges, while contesting everything else. Doc could also hit the three, shooting decent (for the mid-1970s) consecutive averages of 39.5%, 33.3% and 33.0%  in his most active trifecta stretch from 1973 to 1976.

Like all great players, Doc could shoot from anywhere in the clutch.

The NBA adopted the shot in the 1979-1980 season, and by then, Erving, as with most teams in that era did not shoot many as it was regarded as a low-percentage shot.

The Celtics in particular had some success in the regular season and playoffs containing Erving in the half-court, forcing The Doctor to improve his outside shooting and passing.

A quick look at his field goal percentage, especially in his elder years confirm this.

In short, Erving had a good jumper, but not great, and as Terry Pluto wrote in the great basketball book Loose Balls, “everyone was thankful for that.”

Julius Erving was much more than a nice guy who could dunk on people. The all-pro selection is one of the primary indicators of skills. The record shows Doctor J was a first or second team all-pro 12 times in 16 seasons. How many selections does your favourite legend have?

So, there you have it.  Shaq is not just whistling Dixie when he says he thinks Erving is the best. These are but a few facts that justify the position.

Take that, as Doc would say. 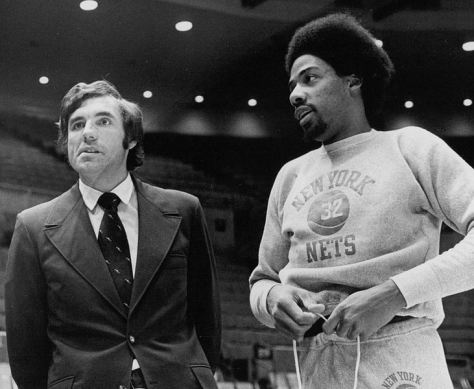