Our focus this week is none other than Bellator flyweight Ilima-Lei MacFarlane (3-0-0).

MacFarlane defeated Amber Tackett with an armbar submission 2:09 into the first round at Bellator 148 last Friday.

When we look at what makes a female fighter successful, especially with the still developing WMMA, skill, action and charisma seem to come to the surface. We can see that with Holly Holm, Gina Carano, Ronda Rousey, etc. MacFarlane may not have been in the game as long, but she displayed all of the above at Bellator148, proving she is someone to keep an eye on.

She spoke recently to my colleague Kenai Andrews before the fight and answered some questions I had for her. Let’s take a look at her responses before continuing:

Cassie Wiseman: Several of the female fighters that have joined Bellator have joined because of the direction, the vision, that Scott Coker has for WMMA. What made you join Bellator? Based on your experience so far,  what would you say the future of WMMA looks like for Bellator?

And when I did join Bellator, it was really the staff that made it so much better. They were all very welcoming, so down-to-earth and made me feel like family, which I really loved. A lot of them have ties to Hawaii or the Pacific Islander, so that made it really nice. It was just like a small family, so yeah, those were the reasons I joined Bellator.

Cassie Wiseman: You are a fighter who likes to stay busy. Aside from fighting and training, what’s something that you like to do that most people might find surprising?

Cassie Wiseman: When looking at your fight against Katie Castro, then comparing it to Maria Rios, it’s noticeable the improvement in your striking and your setup for your throws. Has striking been a focus or was it just the style of fighter that showed the different skill setting?

Ilima-Lei MacFarlane: I think it was a little bit of both. We didn’t really know anything about Katie Castro. Well, I knew she was an aggressive fighter because I saw her fight previously against Kristi Lopez and I remember she pushed forward and tried to bumrush Kristi and she pushed her against the cage, so I was expecting something like that to happen again. And as for Maria, we thought that she was a Jiu-Jitsu girl, but she is; she has a brown belt in Jiu-Jitsu. So, I think it was a little bit if both. We knew she was BJJ, but she had a background in kickboxing and so we actually focused a lot my striking for that as well. I feel confident in my ground game where I can kind of focus on my standup during my camp rather than just my ground. And the improvement comes from that it was a longer fight with Rios, so it allowed me to showcase my skills a little more. It’s both.

Cassie Wiseman: What fighters do you look up to in MMA? Why?

Ilima-Lei MacFarlane:  Liz Carmouche. She’s my #1 training partner. A schoolgirl, super down-to-earth, she’s one of my good friends. She’s kind of been like a mentor to me in this whole process. I’ll text her if I have any questions about anything. Yeah, Liz I definitely look up to.

We have some very cool girls training with us. pic.twitter.com/woOeCwlXHA

Other fighters, I have a really good girlfriend Raquel Pa’ Aluhi. She fights for Invicta and is a bantamweight. She’s another one of my unofficial mentors in the game. We knew each other from high school because we wrestled together. She wrestled for Lanai, I wrestled for Punahou.

I probably talk to her almost every day through my camps and everything and she helps me with a lot. I totally admire and look up to her; she’s one of the hardest workers I know.

It would be those two.

Cassie Wiseman: Were you at her fight at Invicta FC 15?

Ilima-Lei MacFarlane: Yes I was, she fought Colleen Schneider. I thought it was a solid card overall. I was kind of disappointed they had to scrap two of the fights. My former teammate Christine Stanley was supposed to fight on that one and her opponent dropped out. That was a bummer because I really wanted to see her fight.  I was actually one of her corners for her last fight with Invicta and also the Ediane Gomes and Amanda Bell fight. I thought was going to be a really good fight. Yeah, so it was a bummer that those two got scrapped.

And of course, I wanted Raquel to win and I just thought It was a bummer about the… I’m not sure if you were there, but they came out they had their walkouts, they had their intros and everything, and right before Big John was about to start the fight, then they’re like, oh wait, the ambulance isn’t back.

I feel like it (the delay) was actually to Colleen’s advantage when it happened. It gave her time to collect herself. She was kind of the underdog going into the fight, whereas for Raquel I thought it gave her a huge adrenaline dump. Her walkout was incredible;she was running out, ready to kill. And all of a sudden, it’s like chill.

Cassie Wiseman: How do you find your education in business helps you? What intrigued you about the Business Management program?

So, I actually… do you know where you got that information from? (Laughs)

But I’m thinking it would have helped me out a lot with MMA. I was just telling my coaches this morning I’m a terrible businessperson. They’re like: You’re too nice. (Laughs).

I graduated in anthropology.

I’ve always been interested in other cultures and societies. I thought anthropology was a perfect fit. Plus, I saw myself going into education. I always wanted to be a teacher. My dad is a teacher, my sisters are teachers. So, I saw myself using my anthropology degree and my masters in laboratory sciences to be a social sciences teacher or a history teacher or something of that nature.

Cassie Wiseman: With every fight a fighter learns something about themselves. What did you learn about yourself from your last fight?

Ilima-Lei MacFarlane: One thing I learned is don’t cry after the fight because I’m an ugly crier. I cried after the last one and all my pictures were terrible. I also take really bad action pictures and to keep my mouth closed because it was open a lot. (Laughs)

I guess that’s something that I learned but if you want something a little deeper than that.. My cardio wasn’t as bad as I thought it was going to be. I went all three rounds and that was my worst fear. Because all of my other fights were two minutes, three minute rounds. I wasn’t sure how my tank was going to hold up but it did. I was like cool, its not as bad as I thought. It can only improve, so that was cool.

Cassie Wiseman: Thanks for your candour Ilima-Lei. Anything else you would like the readers to know about before we go?

Ilima-Lei MacFarlane: Yeah, come check out our gym, 10th planet, San Diego. It’s a really awesome gym, awesome people and I love them. They’re my family and my life has changed because of them.

And there you have it.

Something she said to Kenai stood out to me which goes along with what every fighter wants: “Hopefully, with each fight I can keep proving I’m a good fighter and deserve to be with Bellator.”

Does Ilima-Lei MacFarlane have the skill and action to prove herself as a fighter?

MacFarlane said she’s moved on from this fight and had limited knowledge of Katie, but there are a few things that need to be brought forward. Castro came out guns-a-blazing, so a quick test for any fighter is how one reacts to being rushed. When we look at Holm she uses her kicks to keep distance, Ronda used her Judo. MacFarlane used her natural, precise power for a knockout finish. Every star has their power, and a large part comes to the time in the gym, training for that muscle memory when in such situations. Ronda is naturally able to figure her way around a grappling situation. Muscle memory, embedding a skill into your brain so that the action is the natural outcome. MacFarlane showed her skill and action in her first pro fight.

As soon as a fighter wins one way, we immediately think about the “what ifs.” Rios didn’t rush in, so we got a chance to see what would happen if MacFarlane faced a patient counter-striker. Well, Macfarlane showed her grappling and throws. She credits a load of her skill to her team, as do all fighters. However, in her match against Rios I saw a resemblance of teammate Liz Carmouche. That tricky, ground-and-pound, grappling that almost got her a win over Ronda. Thinking in the clinch is another tricky part of the game. Tate continually proves  her improving ground game, and like MacFarlane, how to make sure you’re in the dominant position. Again, she showed a different skill, but still a load of action to get her the win.

Going into a fight almost-blind, not knowing much about your opponent, makes it difficult to come up with a plan. But she did know Amber was a southpaw. The Greg Jackson camp is known for their game plans. In this situation, MacFarlane and her camp had to guess, and pretty much be prepared for anything. The action we saw led to her submission skills being put on display. In the first round, they end up on the mat and tight against the cage. MacFarlane had Tackett in a tight position, but BJJ needs patience.

Conor McGregor constantly said in TUF 22, to his team how they had to be patient. MacFarlane showed that patience, skill, and put an arm bar into action for the submission win. All the skill and action needed to make noise in MMA, she is showing with only three pro fights. 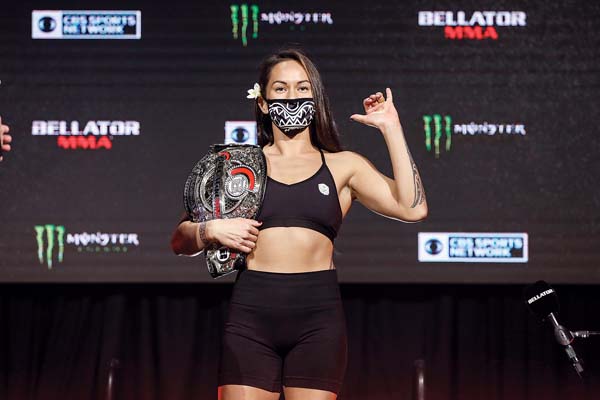