Heather Alonzo’s right hand is powerful and she considers her jab to be her best punch. But her enthusiasm for the sweet science might be her most formidable weapon.

After making the jump to amateur status with Boxing Ontario with a few years of boxing and Muay Thai classes under her belt, the 63-year-old orthodox fighter won her first bout last December and is currently looking for another opponent.

Alonzo (1-0-0) trains under Noel Clubb and Clubb Canada Boxing at the MMA World Academy gym in Scarborough. She typically trains 3-4 days a week for about ninety minutes a session. Thirty of those minutes are devoted to one-on-ones with Clubb, with a sixty minute general class the remainder.

And she’s not a one-trick pony either.

“A couple of years ago, I thought I would try the Muay Thai kickboxing and I won (an in-house tournament),” Alonzo told MMA Crossfire. “My opponent was 25 years-old, came from another gym and wanted to compete. The first time I met her, she told me to bring it on and I thought to myself, ‘What did I get myself into?’ I was so nervous. Because when you meet somebody, you just don’t tell them that.

“But I had already committed, so I thought you know what? I’m just going to bring it.”

“Heather is a fiesty female, who loves to fight,” Clubb added. “She loves the comraderie of boxing, learning and developing her skills. She loves throwing her big right crosses and moving fellow sparring partners backwards as she lands that big right hand.

“She spars with the boys. Again, no fear. I gave her the nickname ‘KO’ after developing her right-hand power punch.”

Her age can make her a curiosity wherever she fights or trains. “I’m probably the oldest in the gym, in any class,” she laughed.

As a fan of the greats like Muhammad Ali, Mike Tyson, Sugar Ray Robinson and Lennox Lewis, Alonzo decided to take her love of boxing to the next level. “I was super nervous,” she said in preparing for her first match. “But my mindset was to win. To do my best and win.”

Everyone is different but for Alonzo, the nervousness of preparing for her first match didn’t take long to fade.

“I think after the first round,” she surmised. “In the first round, I was thinking, ‘Why am I here? What am I doing?’ In the second, I just forgot everything and went for it.

“My coach is fantastic. He’s behind me all the way. We work well together.”

Alonzo has some encouraging words for women of all ages interested in combat sports.

“If you want to try it, don’t be shy. Go for it,” Alonzo said. “And don’t be intimidated. I think that’s one of the things, because women tend to be intimidated when it’s a male-dominated sport. So if you want do it, try it. You’re just never too old to learn something new.

“Because you can say I wish I could have, I wish I should have. I don’t want to go through that in my life.”

Although Alonzo would jump at a title shot opportunity, boxing, for the most part, is a fun challenge that helps her deal with her hectic work and family life. 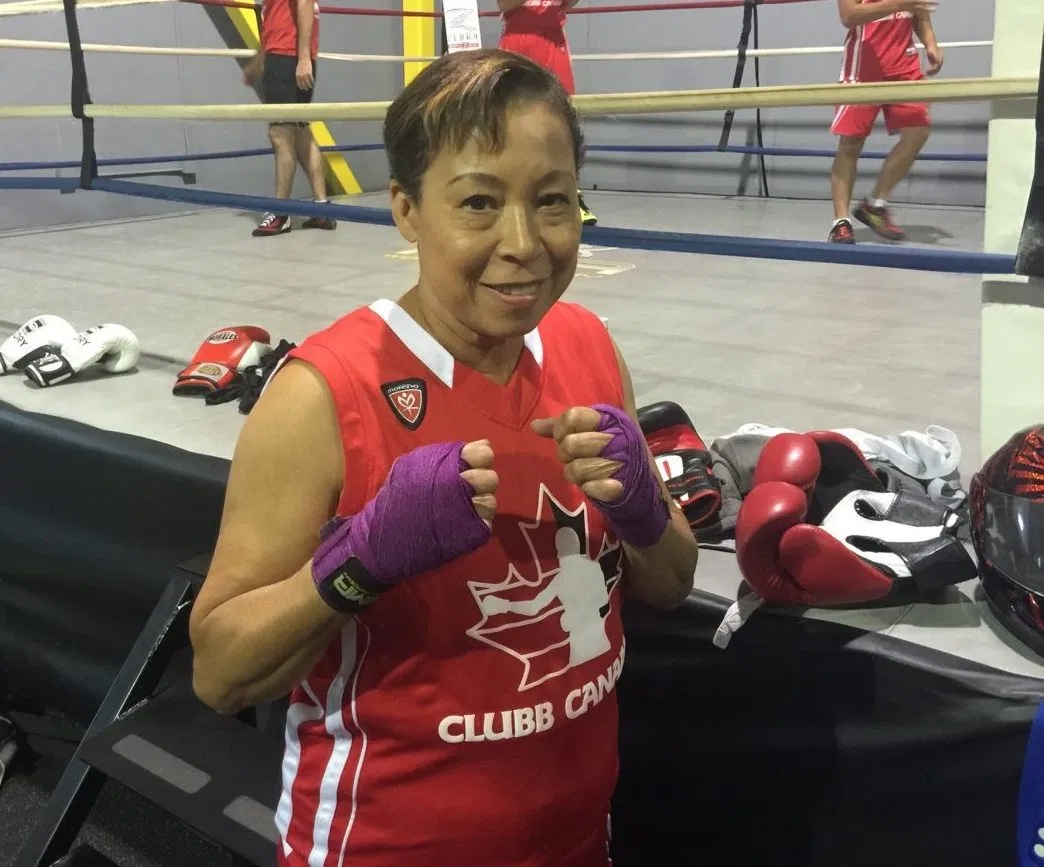