The spotlight moves from Invicta FC 19 to Brazil, and UFC Fight Night 95, where hometown hero Cristiane “Cyborg” Justino – who weighed in at 141 pounds despite some Fight Week concerns – is set to take on the cool and calm Swede Lina Lansberg.

Cassie Wiseman checks in with her thoughts on the main card.

Wiseman: This is going to be a grappling match,  as these guys are talented on the ground. De La Torre is a blue belt, but Pepey is a black belt. Pepey doesn’t care if he is on the bottom or the top, he will make things happen. De La Torre tends to shoot a lot and fires more strikes, but regardless, this will end up on the mat.

Wiseman: The striking of Santos is going to be too much. Spicely has knockout power, but not to the level of Santos, nor the experience. The gound game is where Spicely would dominate, but Santos has decent takedown defence. This won’t be a long fight.

Wiseman: Felder starts slow, but picks up the pace as the fight goes. Trinaldo comes out like a bull, straight out of the gate. I bring this up because Trinaldo likes to grind out his opponents. He wears them down, scores points, and gets the decision win. I see Felder getting frustrated with this, so the first round I have going to Trinaldo. Felder will then have to try to keep things standing, push the pace, and test the gas tank of Trinaldo. Felder will use leg kicks, move on angles, and win the last two rounds.

Wiseman: Silva has been knocked out many times, eight (8) to be exact. He is going in there against a guy who hits like a freight train and has a solid chin. Basically a chin versus chin fight. This is going to be a stand and bang fight, with Silva’s head meeting the mat.

Wiseman: This fight is built for Barao to win. Sure, he hasn’t been the same since he lost the belt and many commentators talk about what happens to a fighter when they lose. The confidence isn’t the same. Barao was undefeated for a long time, battling the best and making them look like amateurs. Of course that was until TJ Dillashaw came on the scene. Now, being at featherweight, he lost against Jeremy Stephens. That same movement and confidence isn’t there. With Nover, he has powerful strikes, but is a ground man at heart. Barao will like being able to roll, using his BJJ. Barao also has knockout power, and dangerous kicks, but I see this being a BJJ match.

Wiseman: Lansberg is strong in the standup, she has good Muay Thai. She doesn’t shy away from grappling, and has heart. Now, regardless of what Lansberg has, we are talking Cyborg. Every fight starts standing and no one can last with Cyborg standing. The power of Cyborg, her versatility with strikes, and her aggression of moving forward, all of that will really be just too much for Lansberg. The only miracle chance that Lansberg has is if Cyborg isn’t able to replenish herself after such a brutal weight cut. At weigh-ins, Cyborg looked drained. However, she still has over 24 hours to get her nourishments back in her system. All the time she needs to be able to prepare to demolish Lansberg. 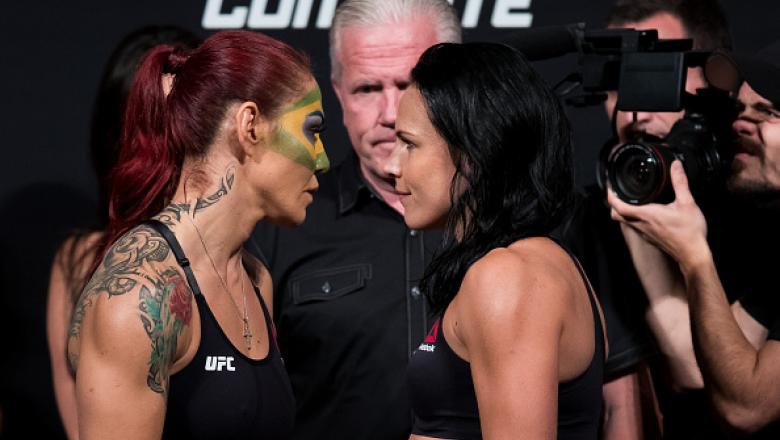