Kunitskaya started off quickly, landing a takedown and taking Cyborg’s back as she tried to get up. But the UFC featherweight champion shook it off to get back on her feet and land some right hands that dropped Kunitskaya. Follow up strikes forced referee Herb Dean to call the bout at 3:25.

With the win, Cyborg notched her 10th consecutive win and extended her unbeaten streak to 21 fights. In the post-fight interview, she set bantamweight champion Amanda Nunes as her next challenge.

Kunitskaya now has two losses in her last three contests. She indicated previously that she will return to the 135 pound division after this fight.

Sean O’Malley and Andre Soukhamthath earned Fight of the Night, while Brian Ortega and Alexander Hernandez earned performances of the night. Each fighter earned a $50,000 USD bonus.

Kenai Andrews checks in with his thoughts.

Andrews: A close fight but Milstead got outworked in the eyes of the judges.

Andrews: Pyle went out on his shield in his retirement fight. He had a good career. Good win for Ottow. 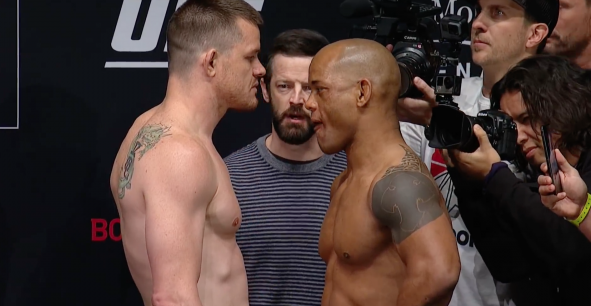 Andrews: Lombard clearly slugged Dolloway after the Round One bell.  Good call by the referee to disqualify Lombard. There could be additional consequences for him.

Andrews: Dodson was too quick for Munhoz, but couldn’t get the finish.

Listen and Look at the reactions from the commentators and crowd after that Hernandez KO!!#UFC222 pic.twitter.com/6x0dD7oxJ9

Andrews: A bad move by Hernandez to fake touching gloves. He won, but no one cut him any slack going forward.

Andrews: Dern is still putting everything together. Her striking and defence needs a lot of work. Bring her along slowly, and she will get there.

Andrews: Zingano did well for being away for so long, but Vieira was feisty enough for the win.

Andrews: No one could have predicted a 6-4 man taking down a 6-11 man five times in a bout. Good win for Arlovski, head-scratching loss for Struve.

Andrews: It’s the question everyone is asking. Why didn’t Andre force O’Malley to stand in the last round? With O’Malley hobbling around, he was sure to take the fight via injury TKO. Instead he let a win slip through his fingers.

Andrews: Wow! No one saw that coming! Ultra-impressive finish of Edgar by Ortega, the first one to do it. And poor Frankie. He lost his title shot, but he’ll be back.

CYBORG!!!@CrisCyborg gets it done at #UFC222 in the FIRST ROUND!! pic.twitter.com/JRdd766Yv5

Andrews Prediction: Yana made it interesting early but it became another Cyborg fight soon afterwards. Next.