Daniel Cormier (22-1-0, 1NC) became the first man to defend the light heavyweight and heavyweight belts at UFC 230 with a convincing submission win over Derrick Lewis (21-6-0, 1NC) in the main event.

Lewis, the massive underdog, tried to use kicks and catch Cormier coming in on takedown attempts but only landed a clipping blow the whole night. Meanwhile, Cormier took “The Black Beast” down at will and took the starch out of him with his wrestling. It was a relatively quick night of work for the champ and he confirmed his appreciation of that in the post-fight interview.

The victory now pushes Cormier toward the money fight with Brock Lesnar, scheduled for next year.

Chris Weidman and Ronaldo Souza secured Fight of the Night, while Israel Adesanya and Jared Cannonier had performances of the night. Each fighter earned a $50,000 USD bonus.

De Lima is swinging for the fences in round 2! #UFC230 pic.twitter.com/Qf0nBsNgEy

Andrews: Rogerio De Lima took the starch out of Adam with his strikes and takedowns. And that was that. 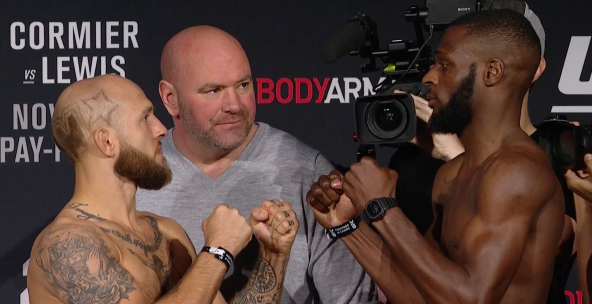 Andrews: Wow! Burgos looked like he was going to get grounded and pounded, but pulled out the armbar to make Holobaugh tap. Very nice!

One of about 57 head kicks landed in this fight. #UFC230 pic.twitter.com/SW1KW0QxRJ

Andrews: Both guys threw defence out the window and concentrated on their offence. Entertaining fight but both guys need to work on their defence if they want to compete with the top of the division.

Cyborg seems like a good nickname for @LymanGoodMMA! #UFC230 pic.twitter.com/5Ep4EdISqm

Andrews: Saunders didn’t look good at the weigh-in and Good caught him early before he could get going. Good win for Good.

Andrews: Moraes confidence from the weigh-ins helped.  What was up with the 30-26 score though?

Andrews: As expected, Eubanks used her weight advantage and grappling to stifle Modaferri. But she still missed weight.

That's one way to try to get someone off your back.#UFC230 pic.twitter.com/YXN7KLEkm3

Andrews: Rinaldi used his experience as expected to temper the determination of Knight. Good win.

Andrews: That was impressive. Adesanya looked like Anderson Silva out there. Well done.

Andrews: Roberson used some crisp counters and strikes to damage Marshman, while avoiding damage himself. Good win, but needs to work on advancing position after the takedown.

Andrews: Branch was doing good with the takedowns until eating the right hand and getting knocked down. Good win for the Killa Gorilla.

Andrews: Wow! Weidman started out fast, but Souza turned the switch somewhere in the second round and with body and liver shots, crumpled Weidman with a big shot to the temple. Zombie mode is real.

Andrews: DC made it look easy. Took him down, and locked in the choke.