Jorge Masvidal has a chance to pull off an upset of a generation at UFC 251 on Saturday, July 11 at Fight Island.

Masvidal (35-13-0), who grew up fighting in the streets of Miami alongside the late Kimbo Slice, has increased his pay grade for the fight to almost what he wanted and is taking the fight on less than a week’s notice to take on welterweight champion Kamaru Usman (16-1-0).

Our friends at MyBookie have you covered for all of the odds of this bettor’s dream matchup.

A win over Usman Saturday would catapult Masvidal’s legend into astronomical levels.

Meanwhile, Usman, who defended the belt against a tough Colby Covington in his last bout, has other ideas.

Stopping “GameBred” is a chance for “The Nigerian Nightmare” to put some icing on his dominant title reign in the division. Let’s not forget that Usman is also taking the fight on less than a week’s notice since original opponent Gilbert Burns pulled out with a positive COVID-19 test.

Andrews: Day had the UFC jitters in his previous debut fight and he should be better, but he’s facing a guy with a lot of experience in Grant. Grant should be able to get Day to the ground and get the tap.

Andrews: Melo is a solid fighter, but Rosa will edge out the decision.

Andrews: Both guys can grind out a win here. Paiva is from Team Alpha Male, which I like, but Zhumagulov seems better equipped to grind things out if he can avoid the big strike.

Andrews: Grishin did well in the PFL but he’s making his octagon debut at 36 years old. Tybura is the bigger guy and I expect him to finish Maxim.

Andrews: Bogatov is making his debut. He is undefeated, but with no octagon experience I have to go with the steady acumen of Santos, who is undefeated in the UFC.

Andrews: This is a good fight. Have to go with Danny Henry getting the hard-fought decision.

Andrews: I value UFC experience almost always and although Jiri has a sparkling record and finish rate, he has never fought in the UFC. Meanwhile, Oezdemir has fought for the belt. Oezdemir just needs to shutdown the headkicks and strikes of Jiri.

Andrews: If I were wagering on this bout, I would take the points on 12 Gauge as they are very enticing as his as +685 I saw. But I still think Ribas will take it despite VanZant’s determination to show her worth.

Andrews: Jose Aldo has been the king for a long time, but finally it is time for others to shine. Aldo will not back down easily, but Yan will wear him down and then get the decision win.

Andrews: Alex has Max’s number. Unless Holloway can make an adjustment, it should be more of the same and a little more as Alex will try to finish Max this time.

Andrews: Usman needs to be smarter than he was against Covington. Don’t get drawn into a shining battle; use your advantage of wrestling to grind him out. Masvidal’s grappling is underrated, but he needs some good shots to affect Usman’s cardio. Frustrate Usman enough to use your superior striking.  In the end, Usman should emerge with the narrow decision. 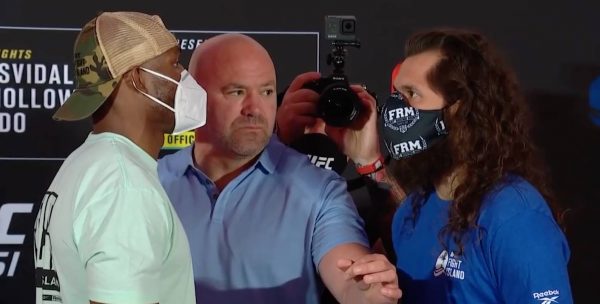