Dangerous Minds at 25 years: 25 facts on its 25th anniversary

Today is the 25th anniversary of the release of the movie Dangerous Minds.

So we figured it was only appropriate to drop 25 facts about the movie.

Released on Aug. 11, 1995 and based on a true story, the movie starred Michelle Pfeiffer who played teacher LouAnne Johnson.

The movie is also based on Johnson’s book My Posse Don’t Do Homework. I highly recommend visiting Amazon to see and purchase her many works.

Some final thoughts from LouAnne on Hollywood:

“Looking back, I think that the problem that I had was my lack of exposure to Hollywood and the way … how much leeway is taken or adaptation of a real story,” Johnson said. “So when people say they saw a true story, it can be based on a true story, but be really different. And I think to have a writer at the beginning should I sell my rights to my book, I would say if you’re going to sell your rights to Hollywood and you’re not going to be involved in the production yourself, then you have to sell it and then walk away. Because if you take your work personally, and you’re emotionally attached to your characters – in my case they weren’t characters, they were real people – which was something that the Hollywood people had a hard time understanding. That these were real people and not just a script. They kept referring to me as a character. I’m a person.”

LouAnne on the actors who played the students:

“Those kids, most of them weren’t actors. They weren’t trained, they got jobs off the street. A lot of them had careers and it was so exciting for them. Some of them still keep in touch with me. One of them (Ebony Jerido) became a writer after I talked to her. I said, ‘Do it. Don’t ask permission from someone else, and don’t let anyone tell you can’t do it or give you reasons why you won’t get published, just go out and do it.'”

LouAnne on her earnings from the movie:

“Yeah, unfortunately, I signed for two per cent of the net profits. There were no net profits, so I got a royalty statement for zero. My agent was an old lady at the time. She’s been dead for some time, but she hired an agent in LA that she heard a lot about. It was a long contract and I was teaching and had 250 adverse kids to worry about as a program director at the time. They sent a 60-70 page contract and the agent said here you go, sign this you’re going to make millions of dollars. I thought great because I had started a nonprofit corporation because wanted to start my own school out in the mountains called Second Chance Ranch where kids ride horses and take care of animals. So I signed the contract, then the movie was done, then Jerry called and said we’re # whatever at the box office, we made a bunch of money. They made about $186 million. I figured it out and thought they owed me $750,000. No, they sent me a statement for zero. I called my agent and asked, ‘Hey, what’s the deal with the zero statement?’ She said, ‘Oh, you signed for two per cent of the net profits. There’s never any net profits.’

I said,’ But you told me to sign the contact.’ he said, ‘You should have known better.’

“I used part of that money to get 40 acres out in the desert, started a non-profit (called Second Chance Ranch). It would have been enough to get a school started. I sent out letters for donations. Hollywood Pictures sent me a cheque for $250. Pfeiffer sent me a personal cheque for $10,000 USD. I think that speaks for itself. But then I got little dribbles and drabbles and it wasn’t going to be enough, then the zero royalty statement, plus I had to earn a living. So I sold the property then I gave the money to a Hispanic alternative school. I learned an important lesson.”

“Then I contacted the author’s guild and they said I should have sent them the contract and hired an entertainment or media lawyer who works for you on a one-time basis. Who makes sure you get a cut of the gross, not the net.”

Yahoo recently talked to Coolio about his thoughts on the movie and his song “Gangsta’s Paradise,” which also turned 25 years old this year. He also shares his experience filming the iconic music video with Michelle Pfeiffer.

So, there you have it. For better or worse, Dangerous Minds helped define a generation and is now being rediscovered by a new generation.

That, is a choice.

@mmacrossfire
Follow
Previous articleUFC on ESPN+ 33: Robbie Lawler steps in for Geoff Neal
Next articleAndrews: May the best octagon heavyweight ever win at UFC 252 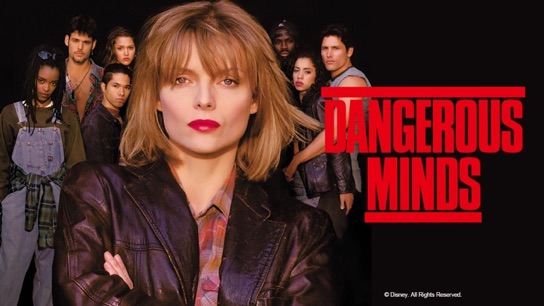