Manfredi originally revealed the fight in an interview on The Wiseman Report in late September, adding that they had stopped making women’s fights last year but called her this year with an offer, which she accepted.

Lukjaoporongtom is well respected and known for her aggressiveness. Her experience indicates that while Manfredi may enjoy a slight height and reach advantage, she will need to be on her game if she wants to emerge the victor.

“She used to fight against boys as a child and won!” Manfredi explained from Thailand in an interview with MMA Crossfire. “Our size with Petchjeeja isn’t so different. So I don’t think we will both feel that it matters for our fight. She is an aggressive fighter, and I am too. I guess it’s going to be full of action from both sides.”

Preparation is key, with Manfredi indicating she is healthy to ensure her focus remains on the fight. 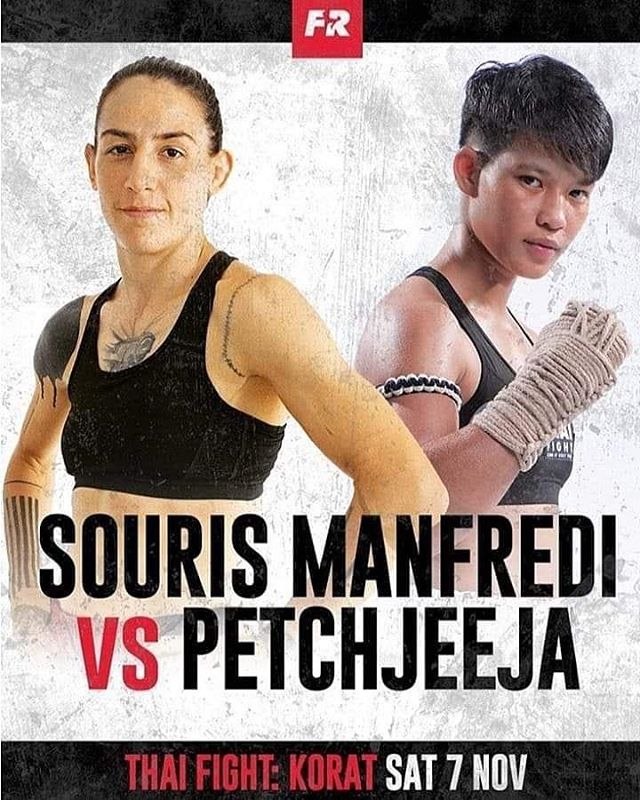 “I’m already on weight and the fight is at 51kg,” Manfredi said. “I had to lose weight because I usually fight at 54kg. But I don’t cut weight, I don’t use those methods. I will never understand fighters saying that the first part of the game is the weight part. I want to focus all the process on how to win the fight, not the weight. It makes no sense in my eyes and and wastes energy.”

Manfredi, who trains with Team Lookyano under coach Charlton Lookyamo in Thailand, usually adapts her training and fight style for each opponent. So what did she do for Lukjaoporongtom?

“I had to work on my speed a lot and being quicker and better with my footwork,” Manfredi said. “Working my boxing skills and work on what I have to do and what I shouldn’t do because of her vast experience.”

As we get closer to Nov. 7, Manfredi is confident her preparation will result in her hand getting raised.

“I’m confident like always. If I’m not ready for an opponent, I wait til I’m ready,” Manfredi confirmed.

UFC Vegas 40: Norma Dumont piles up the points on Aspen...