2021 points to another action-packed year

Like a golfer navigating a treacherous par-5 hole, martial arts practitioner, stuntman, and fight choreographer John Salvitti has overcome the rough grass and sand traps of Hollywood and is now safely on the green with his latest TV venture.

Over the course of his 30 years in the film and TV game, the Boston-strong Salvitti, 56, is known for his collaboration with good friend Donnie Yen on a number of films. A rigorous orientation working in Hong Kong, followed by constant training and a determination to succeed in Los Angeles has helped him to rack up 16 stuntman credits and 10 acting credits amoung other things, according to his IMDB page.

Specifically, Salvitti is credited with being one of the first to incorporate MMA choreography into the Kung-Fu-heavy Hong Kong landscape. That, combined with his energetic, hands-on approach helped him solidify his reputation as an innovative storyteller.

“Tap the target, instead of blasting the target,” Salvitti said when asked about his style. “A lot of people are still blasting the target. I’m big on contact. Sometimes I don’t get jobs because (they might think), ‘Oh, he’s a little rough.’ I’m rough when I grab somebody or you have to take somebody to the ground. Once we’re on the ground, we’re passing guard, I slap on a triangle, they better posture up.

“When a lot guys feel that kind of pressure, they’re like, ‘Man, it hurts.’ I’m thinking, ‘We’re not doing too much yet,'” he laughed.

That approach has produced many success, like the infamous splits action scene with Van Damme in A Pound of Flesh.

Salvitti’s current show – which is currently under wraps – has him teaming up again with writer and director Aaron McGruder (The Boondocks), who he worked with on The Adventures of Hooligan Squad.

“We’re collaborating on a show right now that’s already been picked up,” Salvitti explained to MMA Crossfire from his home in Los Angeles. “Aaron loves martial arts. He has an understanding. He’s a guy who would say he’s a writer. But he has a vision, he knows so much about what he wants. He talks a lot about getting the actors to buy in about what you’re trying to do by way of the action.”

As other choreographers like Roger Yuan and Alain Moussi have noted, fight choreography is a delicate process that demands the intricate weaving of physical talents, problem solving, and other elements under pressure to produce the vision of the director.

“He (McGruder) empowers me and he’ll give me the leeway and freedom to express myself,” Salvitti said. As a fight choreographer, an action director, you’re trying to feed the camera. You’re trying to help them with that. I can’t speak for everybody, but Aaron gives me the freedom to think about where the camera would be. And the show that I’m working on now, he wants to see how I would cut it, so he has me contributing. He wants to see my vision. So it’s a little bit more than just the fighting now.

You’re telling people how to do that so it helps to know what it felt like. A good director will trust you will know how to do that to keep everybody safe.

“It’s a blessing to have a director like that who’s willing to do that to give you that freedom to express yourself as well as behind the camera.”

Salvitti has watched superhero movies like The Dark Knight, The Avengers series and the recent wave of MMA-inspired films push the choreography forward. But there is always something new to learn and as the person in charge of the action, he feels the need to explore it.

“I’m taking classes right now, after twenty years because I want to go into other avenues wrestling wise and (BJJ) No Gi stuff,” Salvitti revealed. “There are so many options right now.”

“We have the eye candy stuff. The big kicks, the power doubles for wrestling, the flying triangles,” Salvitti elaborated. “Now that’s all been done, what happens next? You have to find those little details and how to express it and how it plays to the actor.”

A lot of that training involves mixed martial arts. Salvitti, who trained karate since age 10, credits Canadian UFC Hall of Famer Georges St-Pierre for his inspiration .

“Georges is one of my favourite fighters,” Salvitti said thoughtfully. “I love his spirit. To me, he’s the greatest fighter the UFC’s seen so far. The things that he overcame, what he represents. Reading his book gave me chills and put me over the top. I love the guy.”

“He (GSP) inspired me to look at the way he fought … He had the technique to pass guard or to wrestle somebody down. But he also had that grit to grind out people and smash through them,” Salvitti said. “He had the power, finesse games.”

“Look at the way he treated his team,” Salvitti detailed. “He loved his instructors. He exemplified everything you wanted in a mixed martial artist. I’ve watched his stuff and I would love to meet him and tell him. There wasn’t a fight he had that I didn’t see and study.”

“Van Damme once told me I look a bit like him,” Salvitti laughed. “Someone like that tells you look like somebody, the ten-year-old kid in you starts to visualize it.”

The business side is just as essential as the creative part and Salvitti shared some of the things he looks for before steps onto the set.

“When I get an offer for a good job, the first thing I think about is: Can I be successful at it?” Salvitti said. “I don’t just take a job anymore. My wife doesn’t like that because she likes me to work. But I don’t like to take jobs when I feel the the production is not letting me be in a position to succeed.

“It doesn’t always mean the budget,” Salvitti emphasized. “It means the vision of they want to do and can they do it. If the budget is lower, we don’t have to go to Japan, we can stay local.”

“When they give you the tools, you can hire your team who are not a group of yes-men, but skilled collaborators who bring something to the table to elevate the scene.”

For now, Salvitti is enjoying tackling 2021 – one action-packed frame at a time. 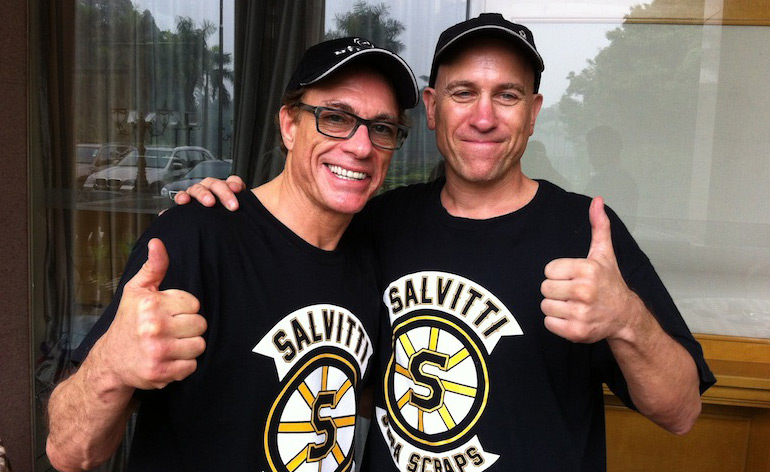