UFC middleweight champion Israel Adesanya his chance to add the light heavyweight strap to his collection when he faces Jan Blachowicz tonight at UFC 259 in Las Vegas.

Blachowicz has settled nicely into his role as the light heavyweight champion and as the bigger fighter has the strength advantage going into the bout.

One fighter, flyweight Askar Askarov, came in one pound heavy for his fight with Joseph Benavidez and will pay a percentage of his purse to the NSAC.

Andrews: A motivated Trevin Jones makes a statement to the NSAC with a big win.

Andrews: Gimme 200 for The Doctor!

Andrews: Souza’s aggressiveness and BJJ should power her to victory.

Andrews: Ulberg is making his debut from DWCS and I think he comes in and wows everybody.

Andrews: Espinosa has lost three of his last four bouts, so he needs a big win. But I think Elliott grinds it out.

Andrews: Kara-France needs to use his striking and keep the fight standing. Bontorin was watching the Royval fight and uses it to get the tap.

Andrews: Askarov missed weight. I think Benavidez returns to form from the last two beatings, but Askarov edges him.

Andrews: Yadong has fought better competition I expect him to pick Phillips apart.

Andrews: Cruz is older now for the elite competition but a handful for the up-and-comers. Kenney looks like he can grind out the win, but I have to see it.

Andrews: I like Santos, but Rakic is a bigger version with a better ground game.

Andrews: Dober can use his striking, but in terms of grappling, Makhachev will be tough to beat.

Andrews: Can Sterling use his grappling to wear down Yan? Sure, but I have to see it first because no one has been able to get to Yan.

Andrews: Nunes cannot underestimate Anderson nor take unnecessary damage like she did against De Randamie. Assuming that, Anderson will be a target for Nunes to focus her fury on.

🏆 @JanBlachowicz vs 🏆 @Stylebender – this is where legends are made!

Andrews: I will take technique over strength every time. Blachowicz needs to pressure and wear down Stylebender, make this uncomfortable. Can he do it? It’s possible, but my money is still on Adesanya.

Editor’s Note: We check in with fight choreographer and martial artist John Salvitti for his pick:

Salvitti: Blachowicz will hunt early and both men will chop at the leg early. Izzy with that mastery of all four ranges will have to figure out the all important distance range early and quickly as the giant Blachowicz will look to command the center of the octagon … slow down, pressure and sting – hurt the faster Izzy … Izzy will look to precision pinpoint target attacks, stick and move early and frustrate the bigger stronger 38 years young JB!

The fight wears on into the latter rounds and with Izzy’s speed advantage and mastery of those four ranges taking a toll on Blachowicz, it’s the volume striking that sees Izzy in a favourable transition to the back of Blachowicz for the rear-naked choke attempt, but not over yet. Into the fifth round. If Izzy can’t finish JB here, he will win by unanimous decision and become champ-champ. I can hear Bruce screaming already! This is gonna be a freaking wild one. 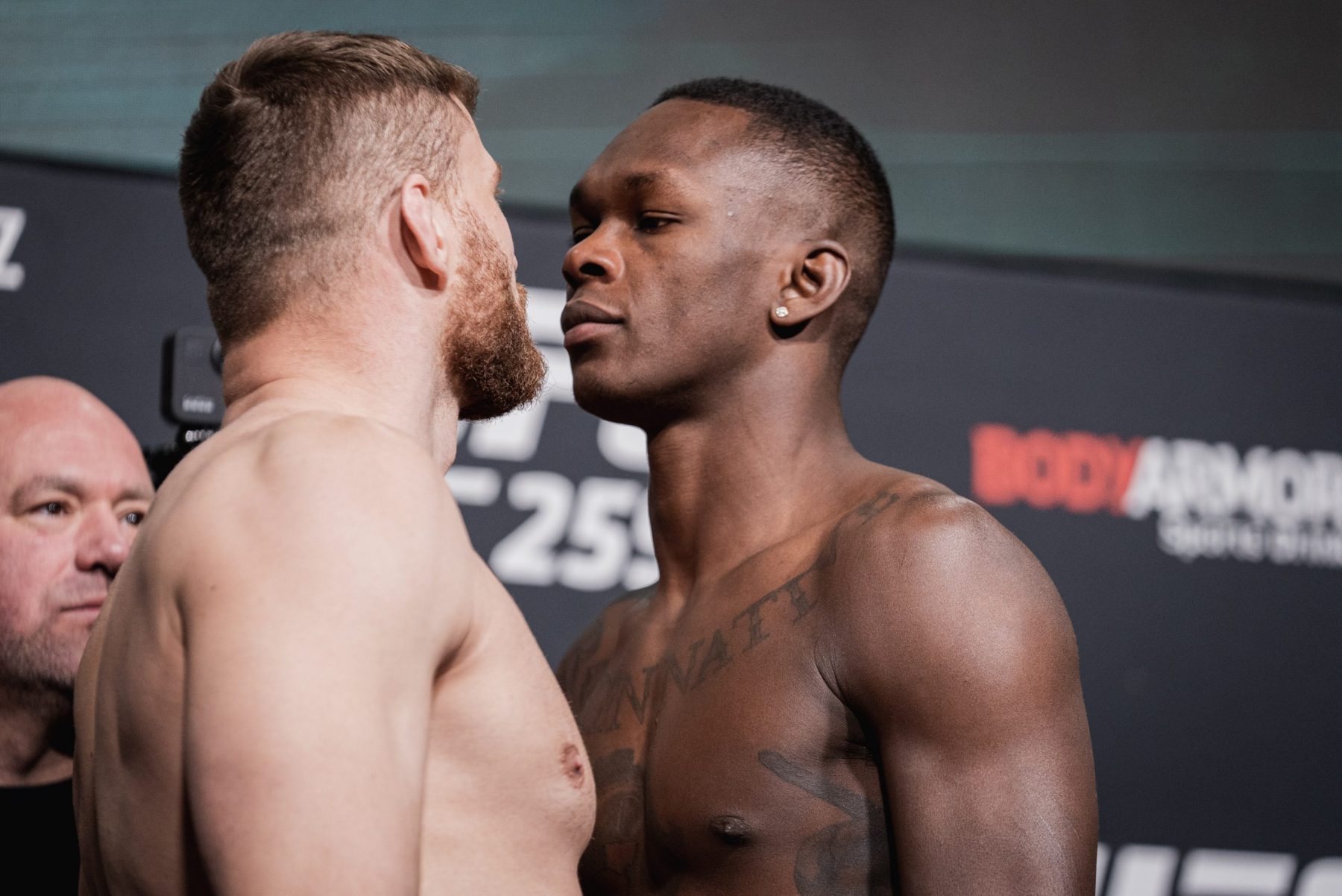