On paper, the fight appears to be a good one.

“Nat Thrills,” (16-2-0), 33, struggled in ONE Championship against top competition, but found her groove several years ago when she returned to her Muay Thai roots in 2018, training primarily at the Boonchu International Muay Thai Gym. She won the Australian nationals in 2018 and January 2020.

Hills told The Crossfire that since wining the Australian Nationals, she had five training camps for fights that were cancelled with the current Coronavirus pandemic playing a role in most of them. One of those fights was a Muay Thai title fight.

The May 1 52kg bout will be five rounds, with each round lasting two minutes.

Meanwhile, “Bummble Bee” (21-7-0, 3 KOs) will look to rebound from a decision loss to Supergirl Jardonsak in February. She hails from the Sunshine Coast and despite being much younger than Hills at a reported 17 years old (attempts to confirm Harberger’s age were unreturned as of this writing), is a 2019 WMO Muay Thai world champion.

XFC 49: Queens of the Cage is the company’s first all-women’s combat sports card, set for May 1 at the Mansfield Tavern in Brisbane, QLD.

Tickets are available through Eventbrite. 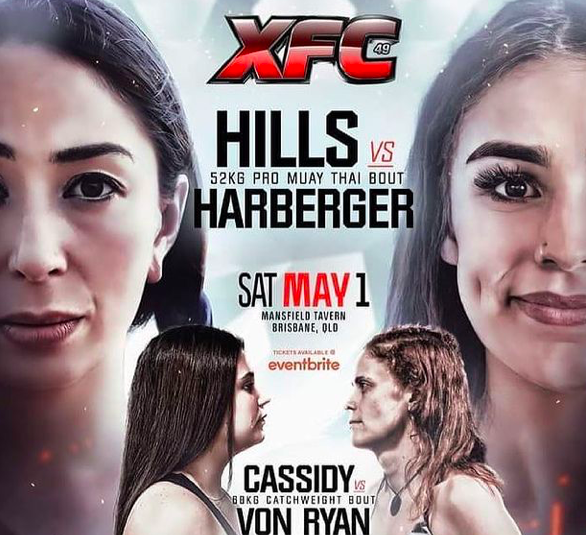