UFC 129 was a high watermark moment for Canadian MMA. But looking back 10 years later does bring back some uncomfortable realities.

Held at Toronto’s Rogers Centre on April 30, 2011, the card featured a welterweight title bout between then champion Georges St-Pierre and American challenger Jake Shields. At the time, the event set an indoor attendance record for the UFC with over 55,000 fans attending.

The event symbolized the successful concerted community effort to legalize MMA in the province of Ontario and across Canada.

“The whole experience was magical and memorable,” former Canadian broadcaster “Showdown” Joe Ferraro explained to MMA Crossfire. “From start to finish, from the day of the announcement to the post-fight press conference, it was one massive joyful event that showed how lucky I was back then to have an amazing team and deep network. My favourite highlight, was finally making it to my seat during the main card (Machida vs Couture) and simply sitting down and soaking it all in. To be able look around and see the Rogers Centre packed with over 50,000 people in my hometown was surreal and truthfully, a tear jerker.”

At the time, Ferraro was the face of Canadian MMA programming, as his MMA Connected, UFC Connected, and UFC Central television programs aired weekly across Canada on Sportsnet. It was in many ways the most accessible way for fans to keep up with MMA and the UFC in Canada.

UFC 129 certainly made a splash. But Ferraro harbours no illusions about its long term impact.

“It (UFC 129) started a nice grassroots movement but the Ontario Athletic Commission succeeded in crushing it again,” Ferraro, who still occasionally calls fights for Rizin, said. “It will never thrive to what it should be. At least not in my lifetime.”

Many longtime fans remember the Ontario Athletic Commission, who under Ken Hayashi, stifled the legalization of MMA for years, pointing to Section 83 (2) of the Criminal Code.

“83(2) In this section, “prize fight” means an encounter or fight with fists or hands between two persons who have met for that purpose by previous arrangement made by or for them, but a boxing contest between amateur sportsmen, where the contestants wear boxing gloves of not less than one hundred and forty grams each in mass, or any boxing contest held with the permission or under the authority of an athletic board or commission or similar body established by or under the authority ofthe legislature of a province for the control of sport within the province, shall be deemed not to be a prize fight.”

This was interpreted selectively to MMA but not to other combat sports like boxing or kickboxing. It ultimately took the deep pockets of the UFC lobbying campaign to update the criminal code.

“I worked tirelessly for years to get MMA legalized in the province as well as put together the framework for amateur MMA,” Ferraro said. “Provincial bureaucracy did nothing but crush it and make it extremely difficult. The shadiness within the ministry cannot ever be overstated. In the end, it wasn’t until the UFC got involved, with their funds put forth towards lobbying efforts that truly made the change. Once money gets involved and the right people are affected, things happen. It was a huge lesson learned for me. No matter what you know or who you know, if you don’t have the coin, you will not make change.”

Was it worth it?

UFC 129 holds a lot of memories. Ask Canadian UFC lightweight John Makdessi (18-7-0), 35, who competed on the prelims, scoring a spinning backfist TKO of Kyle Watson in the card’s second bout.

“It’s the most glorious and fullfilling feeling to be able to chase your dreams and to live it,” Makdessi said. “I always grew up watching warrior movies and great men accomplishing great things. And for me it was a sense of accomplishment to be able to do what I dreamt about.”

“Having my own training camp alongside Georges St-Pierre and fighting in a baseball stadium were some of the biggest experiences of my life.”

Over the years, the UFC went on to hold a consistent schedule of events across Canada, before moving on to focus on other world markets. With the marketing machine elsewhere, the mainstream reporting of the sport in Canada eventually drifted to a general level of business and indifference we see today.

“I think the proof is in the pudding and it’s safe to say that a resounding “no” to the question of ‘has the mainstream Canadian sports media the sport properly,'” Ferraro said. “The big networks no longer truly care about the product. Far too many agendas and politics. Many of us walked away or were forced out because we were disheartened and disgusted by the executives in charge at the time. They were no different if not worse than the Ontario bureaucrats who refuse to let MMA flourish in the province.”

It’s a different story in the United States, where major networks like ESPN and FOX have for the most part, embraced the MMA landscape.

But what a night of fireworks UFC 129 was. Lyoto Machida’s karate kid finish of Randy Couture. Mark Hominick’s walkout with his late coach Shawn Tompkins, the hematoma, and valiant effort against bantamweight king Jose Aldo. The UFC 129 Fan Expo.

“I remember the energy was unreal,” Jake Ellenberger (31-15-0), now retired, recalled. “The walk from the back to the octagon was like a five minute walk. And to see where this sport has gone and feel that energy was incredible. My favourite part was getting the win on short notice and feeling the 55,000 people in the arena.”

“I had no doubt I would win, but didn’t think it would have been that quick,” Ellenberger added. “There was a very confident and calm feeling going into that fight.”

A legacy on many levels. But even Ellenberger, a Nebraska native, didn’t realize the importance of UFC 129 to Canada at the time.

“Perhaps arrogant, but the legacy for me is personal on many, many levels,’ Ferraro said. “Mainly, it is that Toronto can be the ‘Mecca of MMA,’ but without the right people working together as a team, it will only remain a memory. UFC 129 was the first stadium show for the UFC and it was the perfect storm.

“Unfortunately, it may never happen again. Without the right framework and teams in place, it simply can never be again.” 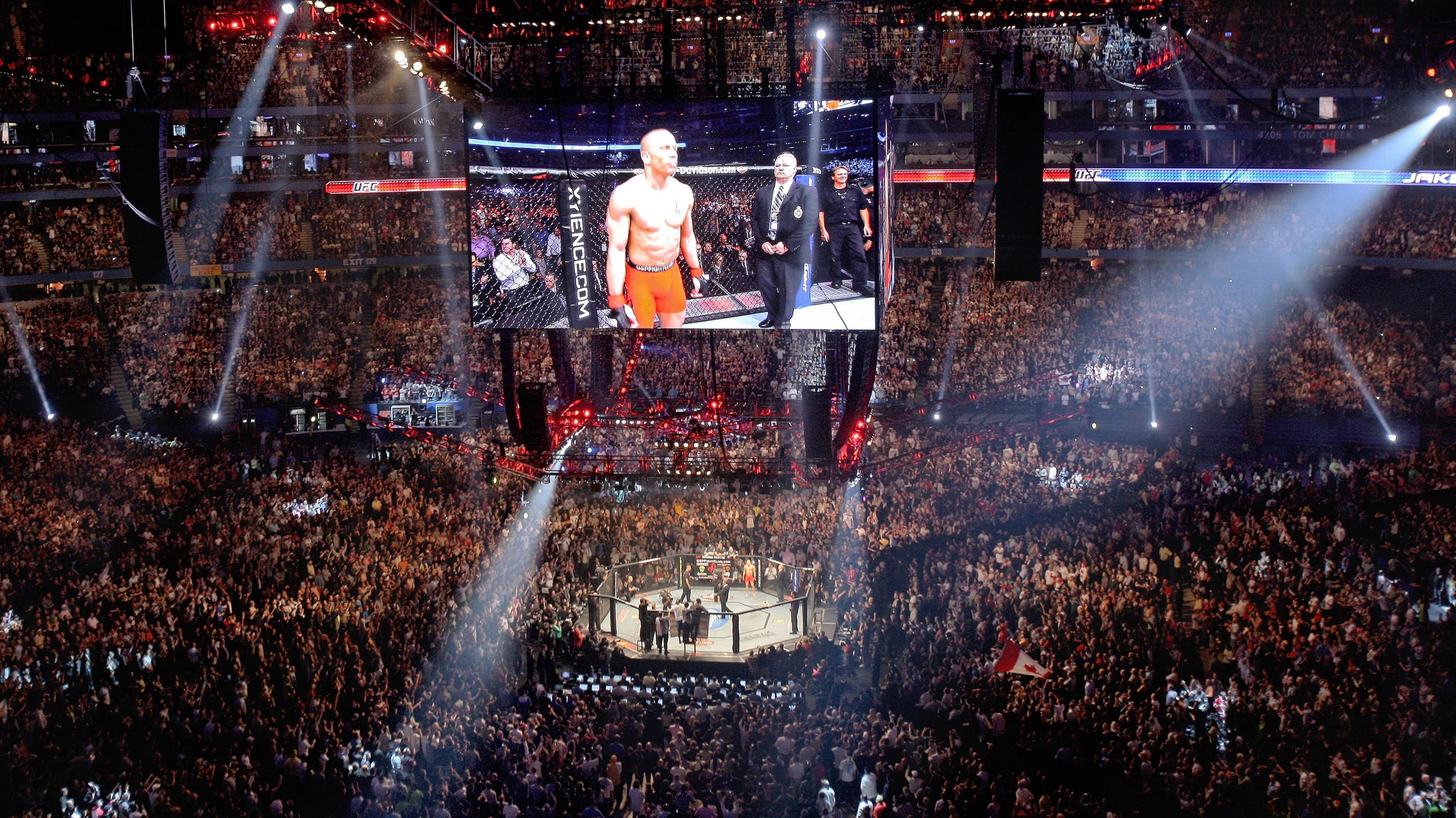