Defending PFL women’s lightweight champion Kayla Harrison was her dominant self at PFL 6 Friday night, but Larissa Pacheco earned the No. 1 seed going into the playoffs.

In the main event, Harrison (10-0-0) was patient in the first half of the bout, taking Dandois (16-7-0) down but rushing nothing. It was near the end of the round with Harrison in full mount where she transitioned to the armbar and the secured the tap at 4:48.

Despite Harrison finishing her opponent in both regular season bouts, the first seed goes to Pacheco, who finished Olena Kolesnyk earlier.

24 fighters in six divisions will compete for the 1-million dollar prize in the playoffs.

Harrison defeated Pacheco in the finals last season to win the title and thus is still heavily favoured to repeat. She will face No 3 Genah Fabian in her women’s lightweight playoff semi-final bout, while Pacheco will take on No. 4 Taylor Guardado. 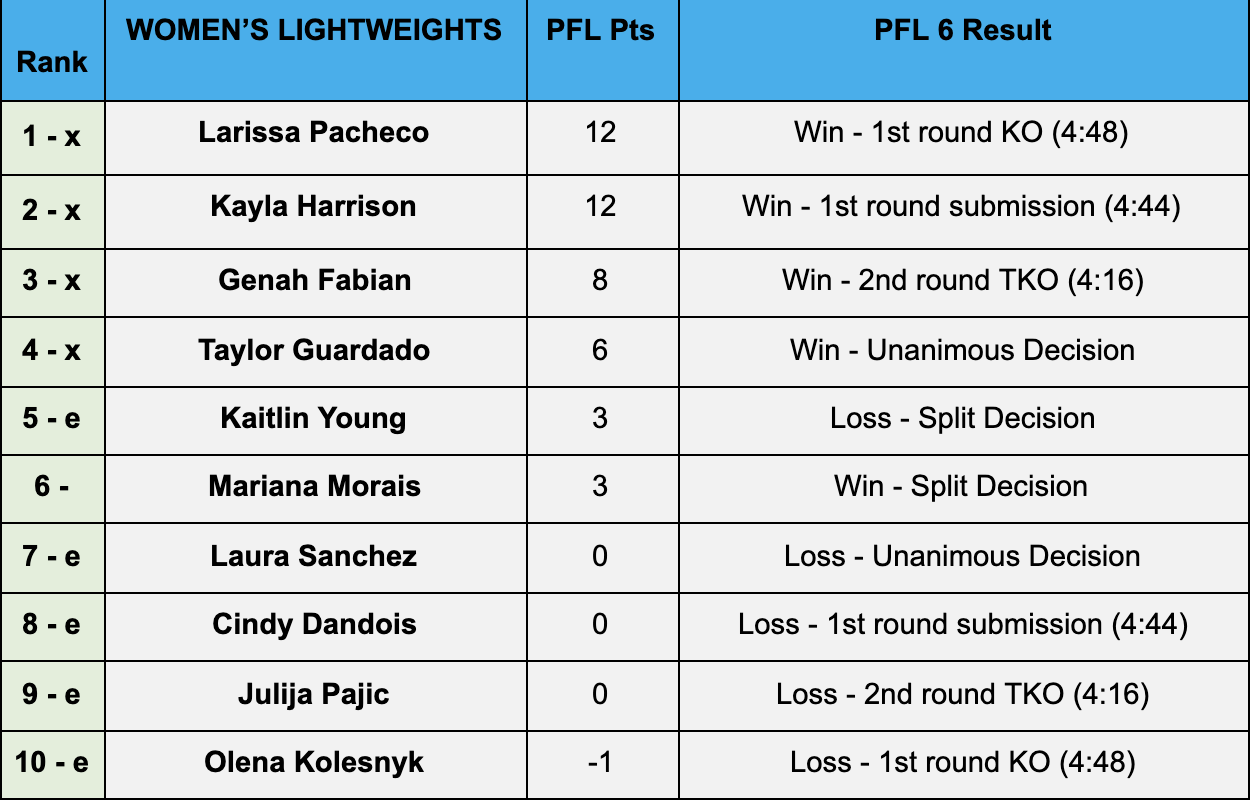 In the heavyweight division, it’s No. 1 seed Bruno Cappelozza vs. No. 4 Jamelle Jones, and No. 2 Denis Goltsov vs. Ante Delija. 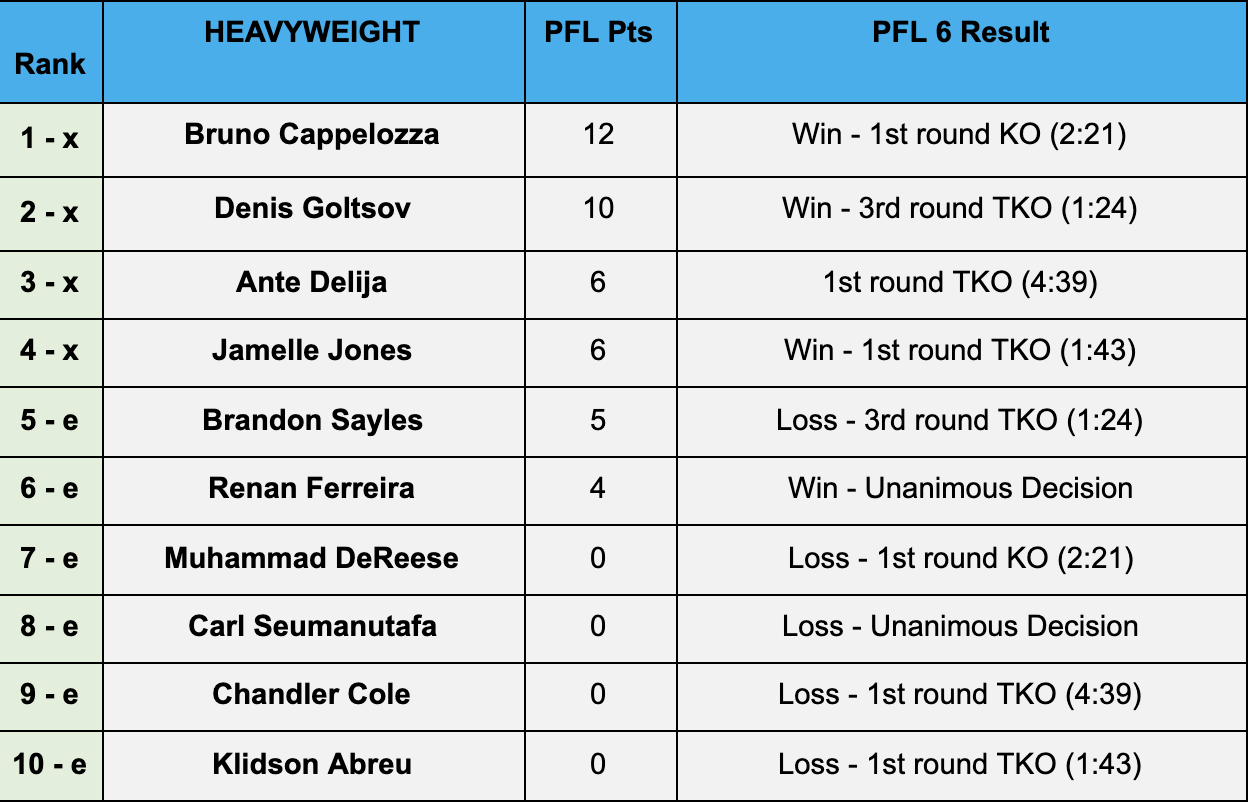 Manfio dropped Pettis twice in the third round to take a 29-28, 28-29, 29-28 victory and grab the No. 3 seed in the lightweight division. In the playoffs, top seed Loik Radzhabov takes on No. 4 Alexander Martinez while No. 2 Clay Collard is matched up with No. 3 Raush Manfio. 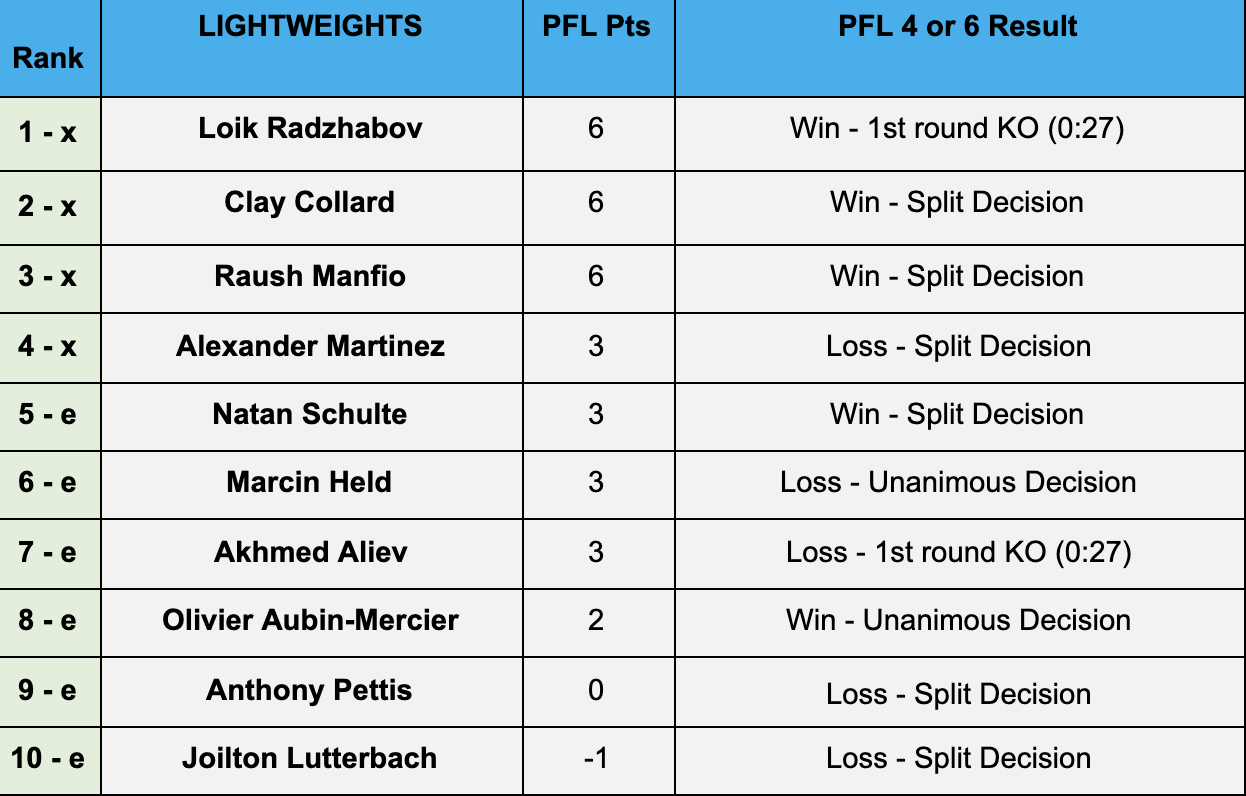 The featherweight division merits some special attention. According to the PFL, “Brendan Loughnane is the top featherweight seed followed by No. 2 Chris Wade. In an unprecedented scenario, both Movlid Khaybulaev and Bubba Jenkins are even in every tiebreaker scenario, therefore, the final seeding for the third and fourth seeds will be determined by coin flip.” 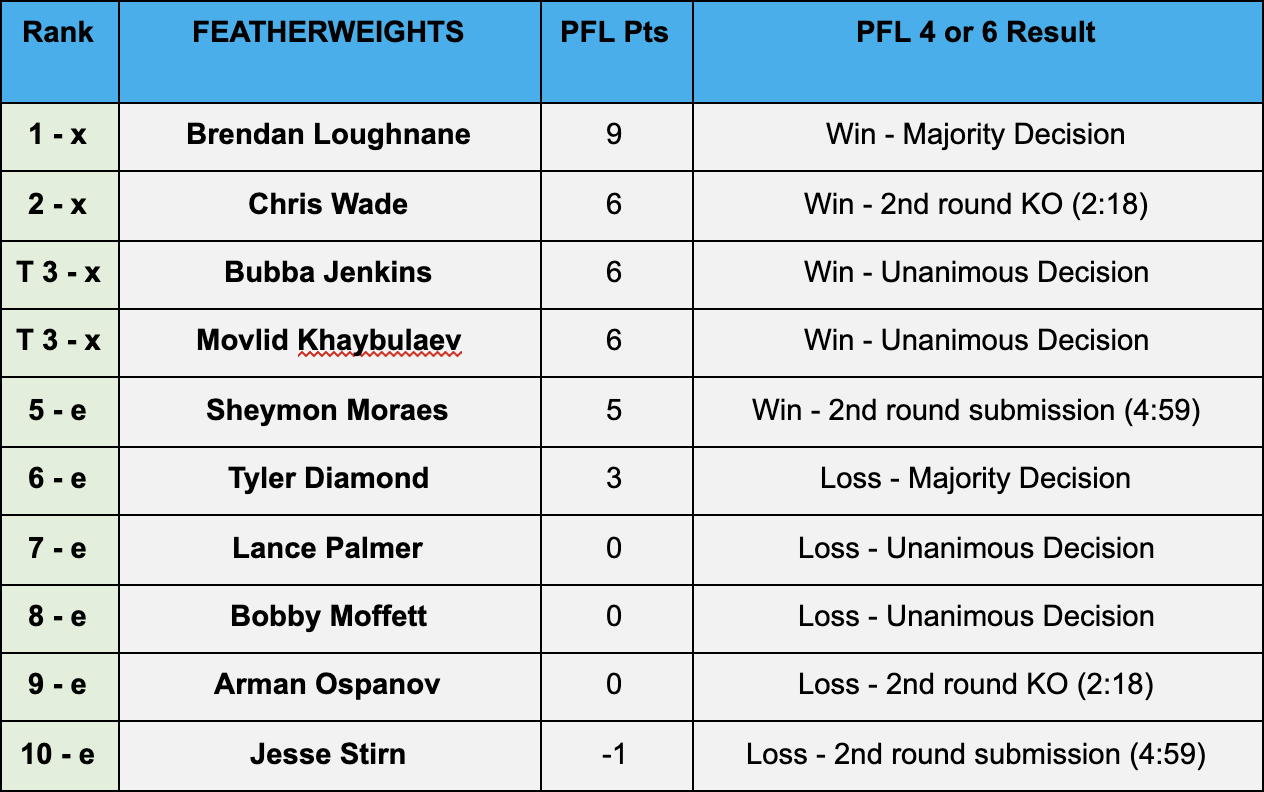 “PFL 6 once again demonstrated that every fight matters,” PFL CEO Peter Murray said in a press release. “Tonight we saw spectacular performances from world class fighters as they made their final push to the 2021 PFL Playoffs.This regular season has been rewarding to watch, and I look forward to seeing the continued action in the Playoffs starting on August 13.”

“Tonight the pressure could not be higher as the PFL Regular Season came to a thrilling close. The athletes laid it all on the line knowing that this was their final opportunity to earn a berth in the 2021 PFL Playoffs,” president of fighter operations Ray Sefo added. “Our unique season formatting delivers excitement to the PFL audience at every event. Let’s go to the Playoffs!”

The playoffs start Aug. 13 at the Hard Rock Hotel and Casino Hollywood in Florida with lightweight and featherweight action. It will air live on ESPN and steam on ESPN+.