Olivera, who recently defeated Michael Chandler at UFC 262 for the belt in May, is scheduled to face off against Hall of Fame harness racer Tim Tetrick over half a mile in a non-wagering exhibition race at Yonkers Raceway in Yonkers, New York.

The event, dubbed ‘Battle of the Champions,’ is being hosted by Empire City Casino by MGM Resorts.

Not many fight fans know that Oliveira (31-8-0, 1NC), 31, is a harness racing enthusiast and will battle the veteran Tetrick between the third and fourth races.

Tetrick, 39, has over 12,000 career victories and has earned multiple Driver of the Year awards from the U.S. Harness Writers Association and the Harness Tracks of America.

“Charles Oliveira is proof of how incredible the sport of harness racing truly is,” Tetrick said in a press release. “It is so cool to share my passion with another world champion. I’m thankful he asked me to play in my octagon, because I sure don’t want to take him on in his.”

“I’m very happy for the opportunity to do this event especially with one of the greatest drivers in Tim Tetrick,” Oliveira added. “I’m very excited to be here, this is a dream come true.”

Trackside at the Winners Circle, fans will have the opportunity to get autographs from Oliveira and Tetrick prior to the approximate 8:15 p.m. ET start time. 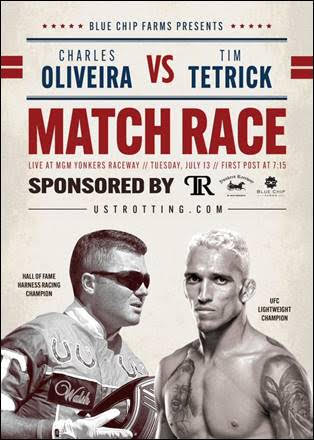