Belfort scored a first round knockout of boxing legend Evander Holyfield in the main event, scoring two knockdowns before the referee waved the fight off.

Holyfield, 58, was coming in on short notice, replacing Oscar De La Hoya who contracted COVID-19. His media workout video in which he looked slow and robotic concerned fans who thought he might get hurt in the ring.

“The Real Deal” looked good physically, but it was clear once the match started that Belfort, 44, was too much. After eating a Holyfield left hook, a Belfort right hand stunned Holyfield which Belfort pounced on to get the first knockdown.

Holyfield got up, but was quickly stormed by Belfort resulting in the second knockdown. After several more shots by Belfort that went unreturned the referee waved the fight off at 1:49.

Holyfield protested the stoppage, saying it was a “bad call” in the post fight interview.

Belfort called out Jake Paul in the post fight interview.

Meanwhile in the co-main event, former UFC middleweight champion Anderson Silva dispatched Tito Ortiz in 1:21. After covering up in the corner Silva evaded the slow and ice hooks of Ortiz and unleashed caught Ortiz coming in with a big right hand, followed up by two left hands that rendered Ortiz unconscious into ropes and face first onto the canvas.

All the action was watched by former president Donald Trump who was in the building. He congratulated Vitor Belfort as a “great patriot” that reminded me of a 2024 election campaign run.

How did you score it?#TRILLERFIGHTCLUB LIVE RIGHT NOW ON #FITE!

Andrews: It was a close fight but Carroll did enough late despite not being able to see to get the win.

Do you agree with the scorecard going into the 8th?

Andrews: Hayes had enough in the tank to get the win against his friend. But he could be out of his mind calling out Tyson Fury.

ANDERSON SILVA KOs TITO ORTIZ IN THE FIRST ROUND 🤯

Andrews: Wow!  I thought Ortiz would go the distance but Silva sent him packing with one more vintage performance.

VITOR BELFORT DEFEATS EVANDER HOLYFIELD IN THE FIRST ROUND 😱

Andrews: Wow! Holyfield was indeed too old to compete. Oscar needs to fight him so we can see what’s up. 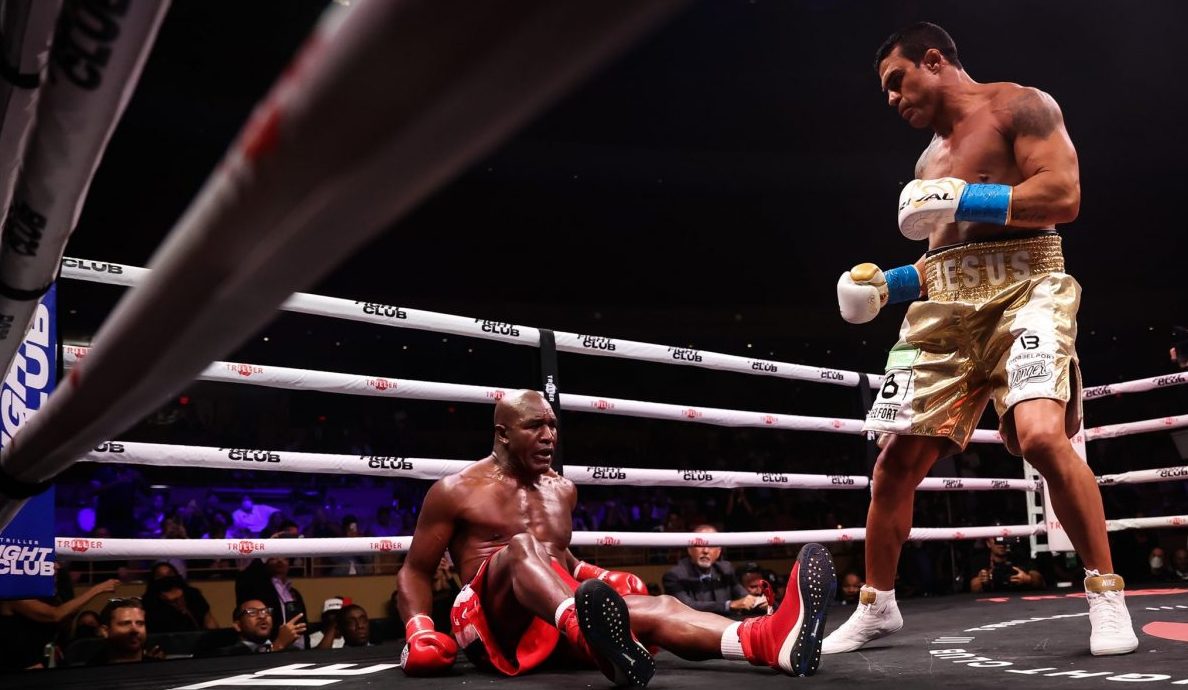