"You will see me one day in UFC. I'm really working on that."

Wushu world champion Elaheh Mansourian is using her platform to not only elevate female athletics but reach for the highest level of competition in combat sports.

It’s a simple goal that has undertaken a lifetime of training and careful planning to navigate the pitfalls of politics and successfully challenge the societal gender limits of Mansourian’s native country of Iran.

The Mansourian sisters, Elaheh, Shahrbanoo, and Soheila, are all world champions in the Chinese martial art of Wushu. Their story was captured in the documentary called Platform, which released in July 2021.

The award-winning documentary, distributed by Venera Films in New York, helped the world to know the story of the Iranian sisters and how they achieved martial arts success despite facing many barriers.

“The first expectation that we had is that we wanted Iranian people to see this (documentary),” Mansourian said in July 2021, speaking in her native language of Farsi and through an interpreter to MMA Crossfire from her training facility in China. “And we wanted to bring hope to Iranian people’s lives. Iranian people have a very difficult life and there is a lot of sadness in the country so we wanted to show that reaching your goals is possible even with so many difficulties.

“We wanted to bring hope to Iranian people. The first reason we did the film was for my country, Iran. After that, it was the world. We really wanted the world to see that with so many limitations and so many inequalities that there is not much possibilities for women in sports in Iran. Most of the opportunities are for men, so we wanted to show that it is possible to fight and reach our goal.”

The sisters train and travel frequently, making it hard to keep up with their family life. For example, Elaheh is scheduled to stay until around December in Shanghai to complete her training. It is possible she could stay longer.

The Mansourian sisters achieved much of their amateur world champion success during the Ronda Rousey era of the UFC. When Shannon Knapp was dutifully building Invicta FC, a 2012 women’s MMA organization that celebrates its 10th anniversary this year.

It was a level of competition thought unthinkable for women in North America only nine years ago. But now with female mixed martial arts continuing to progress globally, there may not be a better time for athletes like Mansourian to push forward all the way to the UFC.

“Before we started shooting the film, we already had gold medals,” Mansourian explained.  So we had our successes and we were a little bit tired after that. We reached that level of world champions and gold medals, but nobody knew us in Iran. We were sort of tired and very disappointed. But we had a decent income and we just wanted to retire and start a family and continue our life teaching Wushu. But when the film happened, gradually people in Iran started to know us because before that they would not pay any attention to us.

“People would take photos with us in the streets, they would recognize us because women’s sports is not broadcast on TV in Iran, so people would never see us,” Mansourian said. “Even in the news, there was no video of us when we were on a match and competing or receiving the medals. But with this film, people started to get to know us and we started to get requests from talk shows to be on their shows for the very first time.”

Even with the exposure of Platform, there is no room for naivety. Mansourian knows she starts at zero to prove she can compete with the best. Then there is time. With no official mixed martial arts record, Mansourian needs to compete in the cage, develop, and allow time for the processes and administrative systems to do their work. That brings pressure and expectations from a nation that eagerly celebrates success and nothing else.

It’s another level of planning, training, and action needed. Nothing is guaranteed.

“I do feel some pressure,” Mansourian admitted. “I feel responsible, because with this film, a lot of people know me, and I’m famous now, so because I’m famous now, I kind’ve feel like I have some responsibility, and I have to help other women also to get to their goals. I do encourage a lot of young kids to go continue this, this martial arts sports, and I try to explain them that there is a future, and I really try to work for that future, to make sure that when they get to a higher level, they have a decent life, they have a decent income.”

Impacting the grassroots of her country is one of Mansourian’s proudest accomplishments. It is something that she feels very strongly about, that every athlete should have the support and respect of governing sports organizations to foster sucesss.

“And I really fought, I continue fighting for Wushu fighter’s salary in Iran for women, because I think that’s very important, and I really want to have a part in that. I also try to incorporate Wushu sports in different parts of the, parts of Iran. For instance in Isfahan, there is a, there is a team called Sepahan, they’re very famous for their football, which is the soccer, what we call football. But I tried very hard to also include Wushu. So they now have a Wushu team, and their woman, their Wushu team, their female Wushu team, they actually make, their salary is higher than men. Our argument is that, Wushu is more difficult for women, so we should get more salary. And, right now, Sepahan is very famous team, they have 25 different, different sports for women, which Wushu is also included.”

These smaller but significant victories have emboldened Mansourian as she makes the climb towards her ultimate goal: The UFC.

The opportunity Mansourian now chases is neatly lodged inside the octagon, located between what is said and what is done. But Manosurian has one very prominent supporter: UFC world strawweight champion Rose Namajunas.

Asked what she would say to White, Mansourian thoughtfully stated her case.

“If you choose me to be in UFC, I’ll be the only, the only Muslim female athlete that can represent a big world. There’s no Muslim female at UFC at this point. I can be present, and represent a bigger world, and I can fight with my hijab, and I can bring all of those Muslims to, to the stands to be included in UFC. And this can bring more income for UFC, and UFC can expand in this way. I think it’s the idea it will be inclusive. It’s going to be inclusive. And I will promise that I can help to bring grants for, more grants for UFC. For instance, if the company wants to sponsor our, our attire, and our hijabs, then you can make money off that. I don’t want any money off that. I just want to be included. I want to represent the Muslim world.”

The UFC currently provides each fighter with a “Fight Kit” or uniform that all fighters wear. Theoretically, it could be modified to include a hijab for female Muslim athletes on the roster.

There is also Invicta FC, the Dana White Contender Series, and The Ultimate Fighter to consider as options.

Older sister Sorella, 33, was also training at a UFC fight camp in Dubai, working on her MMA experience.

The fact that the UFC has bolstered their presence in the region, with fights at Fight Island in 2020 and 2021 has led to local talent appearing on the cards.

“I follow UFC,” Elaheh confirmed. “I try to watch the fights. I really think that is important for me, because the entire world watches the UFC and as a Muslim woman I can do it. It is my job and I want the world to see that. It is very big in the Muslim world and also for Iranians. I’m training now in MMA. It is very difficult, it is very hard. I really want to make sure I can get there so I am training really hard for that.”

“I watch Rose. She has the belt. We follow each other on Instagram,” Mansourian said. “I watch her fights very closely. I really acknowledge that she is a very hard fighter. She lost her belt but tried very hard and it was a year later or because of COVID it was two years after and she won her belt back. I also follow Conor (McGregor) and and Khabib (Nurmagomedov).”

Khabib Nurmagomedov retired from mixed martial arts in 2021 and started up his own organization, Eagle FC.

“I like to compete in 56kg (approximately 125 pounds),” Mansourian said. “I prefer the lighter weight. I’m very tall and I’m very fast with my hands and feet. But wrestling is very important also for Iranians. Wrestling is the number one sport in Iran and Iran is very good at that. I have that wrestling style from Wushu and I’m working on my style for the ground. Technical things. I would like to fight against Rose.”

“She is a hero for me so I really want to try that and challenge myself … There is another Chinese athlete Welei Zhang and I also want to fight against her too,” Mansourian clarified.

Namajunas is expected to defend her belt this year against former champion Carla Esparza.

The year 2021 has proven dreams can come true. U.K. flyweight Jake Hadley made it to the octagon after wondering for a long time and proving himself on the Dana White Contender Series.

In the meantime, Mansourian and her sisters continue to push and watch Rose and Conor do their thing.

“You will see me one day in UFC. I’m really working on that.”

Editor’s Note: Special thanks to MMA Crossfire reporter Anya Wassenberg. Check back for an update on Mansourian’s progress 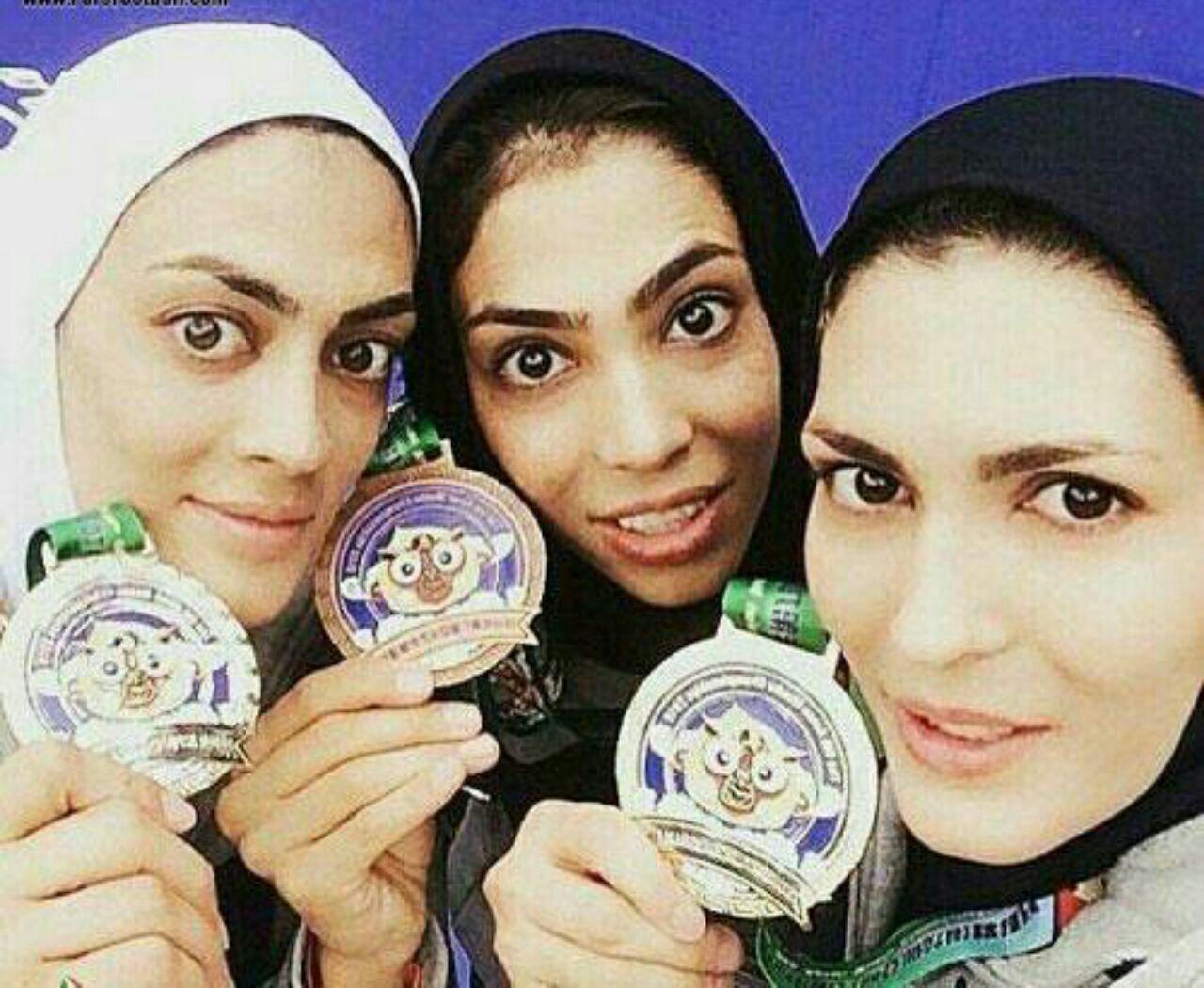