"Never listen to the first diagnosis ..."

It’s been a tough stretch for Mike Swick but just like in the octagon, he’s not going down in his most important battle without a fight.

Swick (15-6-0), 42, shared on Instagram that he has been fighting cancer that he did not even know he had as long as seven months ago through water fasting, chemotherapy, and solid plant organic food.

After initially chalking up some swollen lymph nodes to side effects of the Johnson & Johnson COVID-19 vaccine he received, another diagnosis confirmed for Swick it was cancer.

Swick is reporting the above methods have contributed to the lymph nodes in his neck returning to normal as his recovery continues at home.

“Sometimes life throws you lemons, and then sometimes the whole lemon tree falls on your head! 🤷🏻‍♂️

“Anyway, for those wondering where I have been the last 5 weeks, I been battling Cancer in the toughest and most aggressive battle I have ever had. Started with a 48 hour water fast, then the first Chemo session with an additional 24 hour water fast, then a day of solid plant based organic food, followed by another chemo and fast, then plant based again, keeping this routine until the week was over. From then I kept Chemo every other day for the next 3 weeks while eating only plant based organic cancer killing foods daily.

“After 7 days all 15+ swollen lymph nodes in my neck were completely gone. Never had a single fever throughout, and vitals were always normal. Round 1 went to me for sure! 👊🏼

“Then I continued same chemo and plant based routine, without anymore fasting, until I checked out a couple days ago.

“Now recovering at home and actually feeling amazing mentally! Vitals all still good but still full of Chemo and a little weak and quite skinny. The lowest I got after the fasts and first week was 151lbs. 😱

“I will get a scan and update in just over a week but I decided not to hide this. I want everyone to watch as I beat this BS and recover myself back to 100% with a full recovery. So stay tuned… 🙏🏻

“P.S. I apparently had this for over 7 months without knowing. Even after passing an initial biopsy on my lymph node. Since all vitals were good and I passed all regular tests and blood work, we assumed it was the Johnson and Johnson Vaccine side effects, since the nodes swole up literally the day after I got it. So if you scroll back 7 months on my IG, you can see how much fun I was having with cancer and not even knowing it. Free-diving, skydiving, training… kinda crazy. Be safe everyone and never listen to the first diagnosis.

“P.S.S. Lastly and MOST important is all the appreciation in the world to my wonderful girlfriend Julia, who has supported me more than I ever thought a human could! We are about to have an amazing Chapter 2 my love! ❤️”

Swick fought in the UFC from 2005 to 2015, a total of 14 fights, not including his TUF Finale bout with Alex Schoenauer. 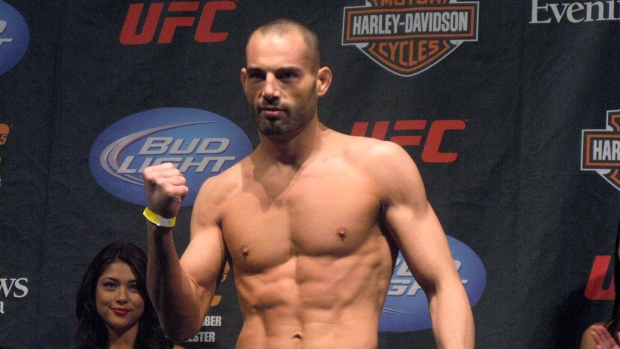