The Oscars: MMA fighters and fans respond to Will Smith’s slap on Chris Rock

It was the slap heard all around the entertainment and combat sports world delivered by Will Smith to Chris Rock at the 94th Academy Awards.

Will Smith apparently took offence to a joke made about his wife Jada Pinkett Smith and proceeded to calmly walk up to him and slap him across the face. Smith then sat down and yelled from his seat: “Keep my wife’s name out of your f*cking mouth.”

Rock tried to explain after acknowledging to the crowd that “Will Smith just slapped the sh*t out of me,” that it was a GI Jane joke.

Rock previously joked about Pinkett Smith at the 2016 Oscars with Smith responding then with the same comment.

“That was the greatest night in the history of television,” Rock said moments later while presenting the best documentary award.

Smith later won his first Oscar, best actor, for playing Serena Venus Williams’ father in King Richard. He then said in sort of apology his acceptance speech. “Richard Williams was a fierce defender of his family. I’m being called on in my life to love people and to protect people and to be a river to my people.”

But the combat sports community, perhaps led by UFC president Dana White jumped online to share their thoughts on the shocking moment.

FINALLY!!!!! there's an #Oscars show worth watching. AND @chrisrock has a chin https://t.co/SYahGonQTg

“At your highest moment, be careful. That’s when the devil comes for you.“

Only Denzel Washington could turn a chaotic moment and career low for Will Smith into a beautiful moment. That man is the GOAT. #Oscars pic.twitter.com/rec7H53yhu

Don’t let Will smith and Chris rock situation distract you from the fact Andrew Garfield was absolutely robbed #Oscars pic.twitter.com/T4rfQZo0Wd

we all know who inspired will smith today. #Oscars pic.twitter.com/rNBcN4vmMC

Chris Rock’s dad waiting for Will Smith at the #oscars parking lot pic.twitter.com/xSonNzgdTL

So #willsmith is allowed to go onstage during a live #Oscars broadcast and physically assault #ChrisRock
and then STILL be able to go on afterwards to accept an award and people in the audience are clapping for him?

Violence isn’t ok. Assault is never the answer. Also? This is the 2nd time that Chris has made fun of Jada on the #Oscars stage, & tonight he went after her alopecia. Punching down at someone’s auto-immune disease is wrong. Doing so on purpose is cruel. They both need a breather.

Denzel Washington is a wise OG for telling Will Smith “at the highest moment becareful that’s when the devil comes for you” 💯 facts. Will and Chris should sort this out… #Oscars pic.twitter.com/CS67YxlhN8

If you're defending what Will Smith did to Chris Rock on a global stage, not only is he a violent, degenerate thug w/the intellect of a child, but you are one too. Especially after Will Smith actually laughed at the joke first. #Oscars pic.twitter.com/WzJoqPagk0

Chris Rock: Will Smith surely won't do anything at the Oscars with millions of viewers watching if I disrespect his wife. I should be fine.

We see violence in #UkraineWar and do little and #WillSmith punches #ChrisRock at the #Oscars and people get mad? #UFC is very popular and legal but fr a slap is what we frown upon. We can watch violence…but get shocked when we…see it? pic.twitter.com/ylknbeJwbC

@willsmith Trying to be like @GamebredFighter now? As a husband I get it. You don’t talk shit about peoples family. And if you do then you get rocked. It is literally that simple folks. #WillSmith #Oscars #ufc https://t.co/fpj2FKO10p 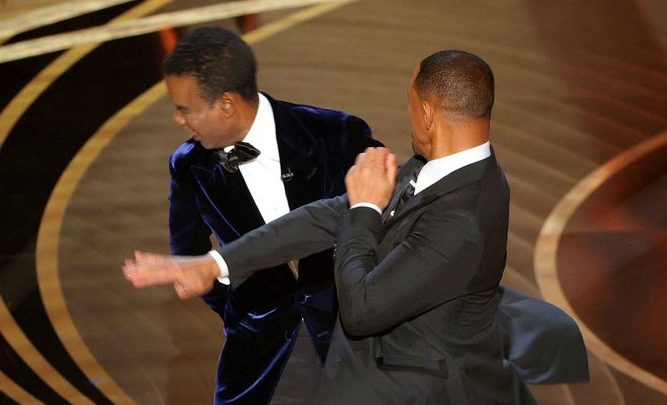 The Oscars: MMA fighters and fans respond to Will Smith's slap on Chris Rock is highly popular post having 108 Facebook shares
Share with your friends
Powered by ESSB