Female fighters around the world weigh in on Claressa Shields vs. Savannah Marshall

We asked female fighters around the world for thoughts on the Claressa Shields vs. Savannah Marshall undisputed middleweight showdown and they did not disappoint.

First, it was Katie Taylor and Amanda Serrano that set the stage earlier this year in April with their battle for lightweight undisputed at Madison Square Garden. Now, we have a historic all-women boxing event highlighted by the middleweight undisputed between Claressa Shields and Savannah Marshall.

In case you missed the July press conference.

Here is the Tale of the Tape:

Now, let’s hear from the fighters:

It’s interesting to note that Bujold opted against going professional after the 2016 Olympics primarily because it was economically unfeasible for her and the difficulty of finding opponents at her weight. Bujold is currently expecting the birth of her second child.

“Yeah, it’s great that they are getting to headline events,” Bujold said from her home in Kitchener. “I have no idea what they are being paid, but I hope it’s big money.”

Asked what kind of offers she was getting after the 2016 Olympics, Bujold was candid.

“I talked to a few promoters and managers and it sounded like it would be hard to find me opponents,” Bujold explained. “This was after the 2016 Olympics. Sounded like they would have to pay my opponent more because of my record and/or bring her from Europe. So numbers were around $10K.

“Now there are more girls in the pros so it might be different. But I still feel like the majority of (women’s) fights are under $10K.”

BUJOLD: I think Claressa takes it. I’ve seen both of them fight many times throughout their career, including the one and only matchup they had. At the time, Claressa was new on the scene and Savannah was more experienced. The scoring system at that time also played into Savannahs favour. She basically just ran and stayed on the outside most of the fight. Claressa is much more seasoned now and should be easy work in my opinion.

Savanah will have the home town advantage, which is her only shot. If she can throw off Claressa’s mental game by making her overreach or over try, she can capitalize on it. It’s going to be a big mental challenge for her, but I think her best shot is the mental game.

Costello is the up-and-coming fighter from Australia who currently holds the Queensland State Super Flyweight Title and Australian National Flyweight title. She is competing on Aug 5 against Michelle Preston for the WBA Oceania super flyweight title. She graciously took some time during training camp to share her thoughts on the fight.

Costello: Personally, I think the fight is amazing. Anything that brings this much exposure to boxing, let alone women’s boxing, is amazing. I love Savannah Marshall. She’s humble, talented, and has a huge heart – my money is on her to take out the win.

This is a huge event and I’m so excited to see who’s announced on the undercard – it will be a great event. Claressa Shields could do with someone proofreading her posts though. She’s claiming it’s the biggest women’s boxing fight of all time … I think we can all agree that title is already taken after Amanda Taylor vs. Serrano setting the stage alight!

On what each fighter needs to do to win:

Costello: To be honest, I don’t know if I deserve to give an opinion on that – they’re both super experienced, and super well versed in their styles. If I were to have an opinion on that, it would be that Claressa will need to be working on a lot to ensure she’s ready for Savannah. I can’t see how she will win if she fights how she normally does.

Whereas Savannah just needs to play to her strengths, and fight her fight. She does that – I don’t see it going the distance.

Preston, a four-time Muay Thai and five-time kickboxing world champion who hails from England and resides in New Zealand, is stepping into the boxing ring on Aug. 5 against Nicilia Costello.

PRESTON: I’m so excited for this fight. They are both great fighters and showcase  women’s boxing at the highest level. It’s a tough one to call, but call it bias or whatever (me being from the UK), I cannot deny the power and composure that Savannah has.

So, I would put my money on Savannah!

Rachel Greenwood is a MMA amateur fighter from Toronto, whom we recently profiled. She is preparing for a fight in the U.S. at the Maverick 20 event in Pennsylvania on Aug. 6.

Greenwood: Definitely an exciting fight with an intense buildup. I like Claressa’s boxing better. I know Savannah Marshall beat her in the amateurs. Never seen that fight and it was a while ago so not really putting much on that. I’d put my money on Claressa. I like her boxing better. But it’s definitely going be a good competitive match.

On what Savannah needs to do to win:

Greenwood: I believe Savannah needs to be Savannah. She has the tools to beat Claressa. She’s long and uses her jab, but I don’t like that she boxes with her hands low. So, hands up. Faster jab to keep Shields at bay. Her timing is really good, but I believe she can develop the hand speed. I’m not into the lazy jab (she has a great jab obviously), but I would like to see it coming out straight with more speed against Claressa who in my opinion tends to keep her body open with her wide shots. Against Claressa, that may present a problem. Claressa is more technical with her form and has faster hands. And lands more power shots. Even though Savannah has lot of KOs on her record. So again, it would be an amazing fight. Both great fighters. I just like Claressa’s odds in this.

Decarie-Drolet is a boxing trainer and cutman, who worked with Shields light-middleweight undisputed opponent Marie Eve-Diciare. Based in Montreal, he is constantly in demand and worked with UFC Hall of Famer Vitor Belfort and other MMA fighters such as Michael Dufort, Yohan Lainesse, Jade Masson Wong, and sometimes Olivier Aubin-Mercier.

Decarie-Drolet: I think it’s going to be an incredible fight! I’m looking forward to see if Savanah will be able to pull it out once again. I’m super glad that we have fight of this magnitude in women boxing. Hamadouche-Mayer, Serrano-Taylor and now Shields-Marshall. We are in a good direction for women boxing. Savanah will have to use her reach, and footwork to win that fight. She need to frustrate Claressa in order to make her make mistakes. Claressa is a very skilled fighter. She will need to use all her assets, but mostly her speed to win that fight. If Claressa can stick to the game plan and use her ring IQ, she could win … but hard work beats talent when talent doesn’t work.

I think Savanah knows that Shields loves the trash talk … I believe she’s smart by being calm and composed … maybe that showed that she’s well prepared.

Claressa Shields vs. Savannah Marshall is scheduled for Sept. 10 at the O2 Arena in London, England. 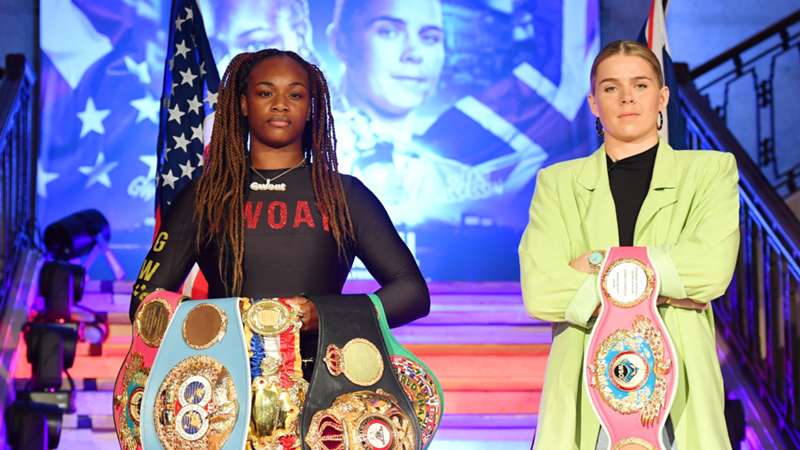 Female fighters around the world weigh in on Claressa Shields vs. Savannah Marshall is highly popular post having 56 Facebook shares
Share with your friends
Powered by ESSB