Former UFC pound-for-pound king Jose Aldo has retired from MMA and fighters and fans alike continue to weigh in on his career.

According to an initial report from Brazilian website Combate, Aldo had one fight remaining on his contract.

The King of Rio calls it a career 👑

For Canadian fight fans, Aldo is remembered for his victory over Mark Hominick at Toronto’s very first UFC show, UFC 129. In that fight, the strikes of Aldo produced a large and memorable hematoma on Hominick’s head.

Initially working towards soccer in his native Brazil as a youth, Aldo turned to combat sports and earned several national BJJ championships. in 2004 just shy of 18 years old, he made his MMA debut.

In the summer of 2008, Aldo made his way to the United States and debuted in the WEC as a featherweight where he won the title, defeating Mike Brown.

23-year-old José Aldo. A deadly combo of speed and skills far ahead of his time. The featherweight GOAT and one of the greatest fighters MMA has ever seen. NINE title defenses, not seven. Mark that down in his HOF induction. @josealdojunior pic.twitter.com/Jsv9U9w5oj

He defended it twice before the company was absorbed into the UFC where he was introduced as the inaugural UFC featherweight champion. He defended the UFC crown another seven times before losing it in 13 seconds to Conor McGregor at UFC 168 at UFC 194 in December 2015.

Jose Aldo’s greatest legacy, IMO, aren’t the title defenses, the wins or the KOs. It’s that he didn’t let the 2015 loss to McGregor define him. Many would have let that moment break them. Not Aldo. He worked his way back & even found success in 2 weight classes. Absolute legend.

Aldo won the interim featherweight crown soon after at UFC 200 in 2016 with a win over Frankie Edgar. McGregor was stripped of the title by the UFC for inactivity. He then tried to unify the belt with undisputed champion Max Holloway, but lost back to back bouts to him.

Jose Aldo, the destroyer of men, giggling like a child trying on his first suit over a decade ago. A poor kid from the favela laughing endearingly at the absurdity that is suit shopping. Legend. pic.twitter.com/MnMs5OORo0

Aldo then moved to the bantamweight division in 2019 and worked his way to a title fight with Petr Yan for the vacant title but lost at UFC 251 in December 2020.

Aldo’s last bout was a decision loss to Merab Dvalishvili at UFC 278 in August. He is expected to be a shoo-in for the UFC Hall of Fame and is currently celebrating the birth of his son.

If this is the end, thank you for the memories @josealdojunior 🐐🇧🇷 pic.twitter.com/XJboYpdxoS 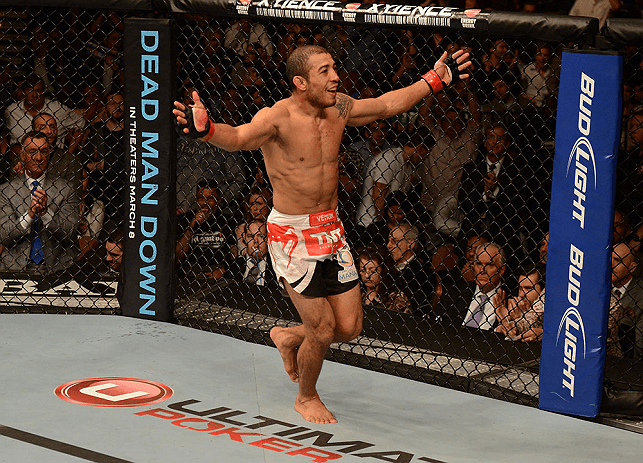